Swell UK customer, blogger and all-round nature lover, Wildlife Kate (blog) took it upon herself to show us all how to successfully build at fabulous garden wildlife pond to help attract and support the creatures in our own back-garden paradises, using a few well-implements products from Swell UK – Her pictures display the results and really show what a little thought and creativity can bring to your garden.

What Kate Wanted to Achieve

Kate built her pond the smart way and really thought about what effect she wanted to achieve, both in terms of the aesthetics and functionality of her new water feature. She took a look at the space she had in her garden and decided she wanted to keep her patio rather than sinking the pond into it which would have affected the area surrounding the pond, so decided a raised pond was the way forward.

This wasn’t designed to be a fish pond, but simply a beautiful place for Kate’s garden wildlife to drink and bath in, and so all she needed was a relatively shallow pond with plenty of rocks for birds to perch on.

How Kate Made Her Pond

After choosing the ever popular Stowasis Small Feature Pond to be the sturdy pre-formed base, Kate looked at ways to keep the pond raised while retaining the natural look of her garden, and this is where the creativity we mentioned came in: she recycled some old tyres to use as support for the preformed pond which you can often get for free from breakers yards as they have no use on a car any more.

She carefully stacked the tyres up, ensuring that they were level (using a spirit level) before inserting the pond reservoir into the whole in the middle of the two tyres – plenty of support!

Next came the pump and filter, both of which Kate wanted to be inside the pond itself to provide a more natural look. Kate contacted us and discussed her project with one of our Swell UK advisors and after a little advice, Kate opted for the Oase Filtral UVC 3000.

After discussing her needs, our advisors suggested this pump for several reasons, including the reliability of the Oase brand, the amount of water that needed to be filtered (the feature pond has a 52 litre capacity) and the fact that the Filtral 3000 UVC is an all-in-one Filter pump, which means that it draws water into the pump via 4 different types of filter media that keep the water clean, before bring the water back up through a garden hose (or alternatively some proper pond hose) to create a small water feature.

The Filtral also contains a UV Clarifier too – a nifty device that shines UV light onto the water as it enters the filter, causing the algae in the water to fuse together and be collected by the filter media, hopefully leaving Kate with crystal-clear water! 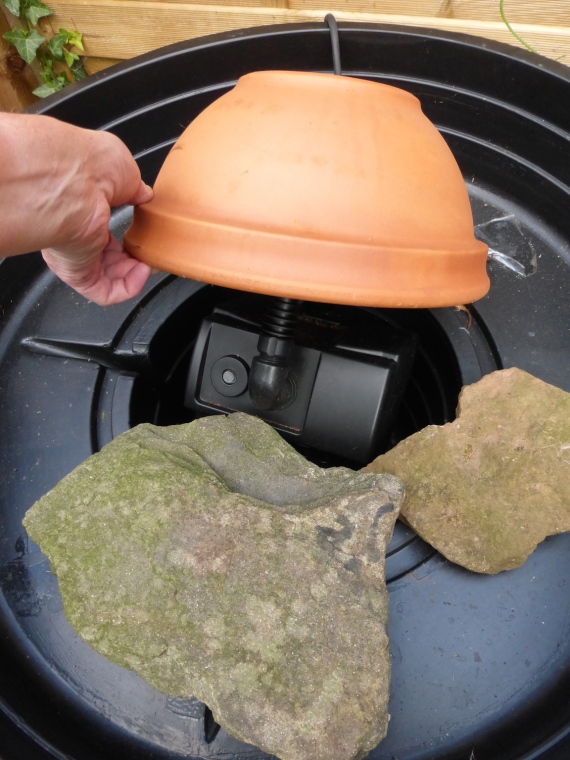 Sadly, the Filter-Pump didn’t quite fit inside the reservoir, but that’s ok. Kate knew she would be covering the area with rocks to create a more natural effect anyway.

With the filter in place, Kate began to experiment with the décor of her new feature pond, trying to move the rocks, wood and pebbles around so that there were some nice shallow areas with perching and bathing spots for all types of birds.

Sometimes, experimenting is the best way and Kate went through a few versions of her knew pond before she finally decided she had it right.

In the end, Kate turned the flow rate on the Filtral down a little and had it splashing on the underside of some rocks to create a calm drinking and bathing oasis, decorated with a few boarder-plants and moss – stunning! 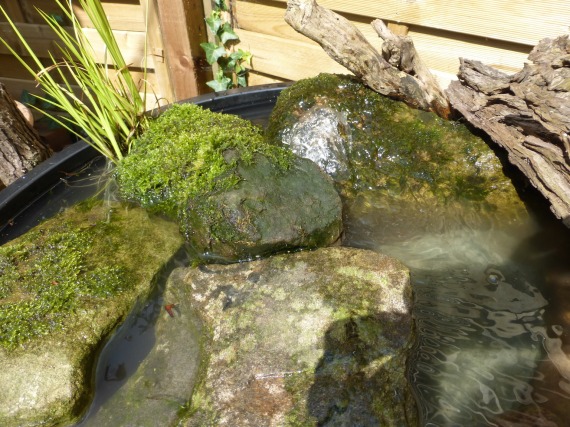 With everything in place and the pond up and running, Kate finished the aesthetics of her new water feature off by surrounding the tyres with some recycled hessian and then some willow screening to bring back a more natural feel. Then with the addition of some potted plants to help it blend in to the rest of the garden, Kate’s work was done!

Even better, Kate was quickly rewarded by a visit from a bathing Robin just the very next day!

Now Kate has built this feature pond, it should last a long time and all that she needs to do is change the UV Bulb once or twice a year and clean or replace the filter media from time to time to keep it looking beautiful, and both Kate and the Swell UK team hope that you will be able to use her example to create your own wildlife spa, too.