How to keep gouramis

Categories: AquariumsFish
Gouramis are one of the most popular groups of aquarium fish. They are widely available, cheap and offer graceful swimming, colour and a centrepiece fish. 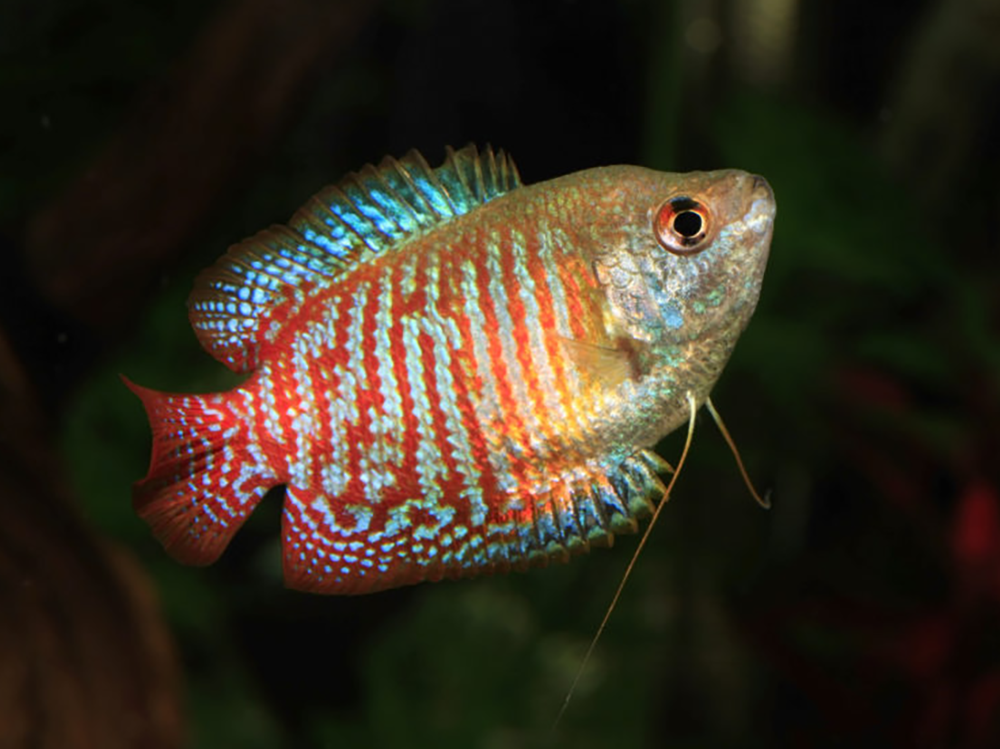 Gouramis are one of the most popular groups of aquarium fish. They are widely available, cheap and offer graceful swimming, colour and a centrepiece fish to the community aquarium.

Gouramis can be told apart from other fish by their high bodies and thread-like ventral fins that they use as sensory organs. All gouramis are Anabantoids or Labyrinth fish, meaning that they possess breathing apparatus called the Labyrinth Organ that enables them to breathe atmospheric air and take oxygen from the surface. This gives them an evolutionary advantage in warm, stagnant waters that are low in oxygen as they can still feed and breed in them, where other non-air breathing fish would perish.

Many gouramis build floating bubble nests too, again to bathe the eggs and fry in extra oxygen when levels underwater are low. Some even mouth brood their eggs, like the delicate Chocolate gourami.

What gouramis are available?

Popular gouramis include Dwarf, Honey, Pearl, Blue, Thick-lipped and Kissing. The Blue gourami, Trichogaster trichopterus is available in several colour and pattern variations so may also be sold as Opaline, Golden or Three-spot. Other species include Snakeskin, Striped, Chocolate, Croaking and Sparkling. Striped gouramis, Colisa fasciata, are also sometimes known as Giant gourami, not to be confused with the true Giant gourami, Osphromenus goramy, which grows to 30”/75cm in length and is a true giant. Dwarf gourami are available in many varieties.

How to set up a tank for gouramis

Dwarf species can be kept in tanks as small as 60cm/24” and 54 litres in volume. Four-inch fish like Blue and Pearl gourami need a minimum 90cm/36” and 180 litres in volume, while Moonlight, Snakeskin and Kissing gourami need larger still. Gouramis don’t appreciate strong water flow so air-powered filtration is fine for the smaller species, or internal power filters with the flow turned down. Large setups can be filtered with external canister filters as long as there are quieter areas in the tank for the fish to take refuge from the flow. When they breed their bubble nests need still water or they will fall apart.

Gouramis appreciate heavily planted tanks so combine bright light, fertilisers and a nutritious substrate, and healthy plants will help to cleanse the water too. Grow plants at the surface and floating plants and they will blow bubble nests around them, using the plants as anchors. Fine substrates, wood and leaves top-off the South East Asian, swamp habitat look.

If you want to create a South East Asian biotope, combine gouramis with rasboras, loaches, peaceful barbs and Asian catfish like Mystus. In mixed communities, they are ok with Angelfish, tetras, rainbowfish, livebearers and dwarf cichlids. Gouramis can also mix with each other and do well in groups. Don’t combine with aggressive fish like African cichlids or large, predatory fish like Oscars. The Giant gourami is too large for the home aquarium but is often displayed in public aquaria with Pangasius, Pacu and Shovelnosed catfish.

What to feed gouramis

How to breed gouramis

First, you need to obtain a species group and sex the adults. With Dwarf and Honey gouramis the males are larger and more colourful, and the females are shorter bodied. For Pearl and Blue gouramis look at the length of the dorsal fin, which is long and pointy in males and short and rounded in females. Feed little and often on a varied diet, provide a quiet area with floating plants and the males will start to build a bubble nest. They entice the females over, they spawn into the nest and a few weeks later, tiny fry emerge.

To breed them properly use a separate, bare-bottomed tank that is shallow. This enables the males to retrieve any fallen eggs and spot them on the bare bottom of the tank. Breeding tanks should have warm, moist air above the surface for when the fry develop the labyrinth organ. Fry should be fed on infusoria.