How to keep damselfish in a marine aquarium 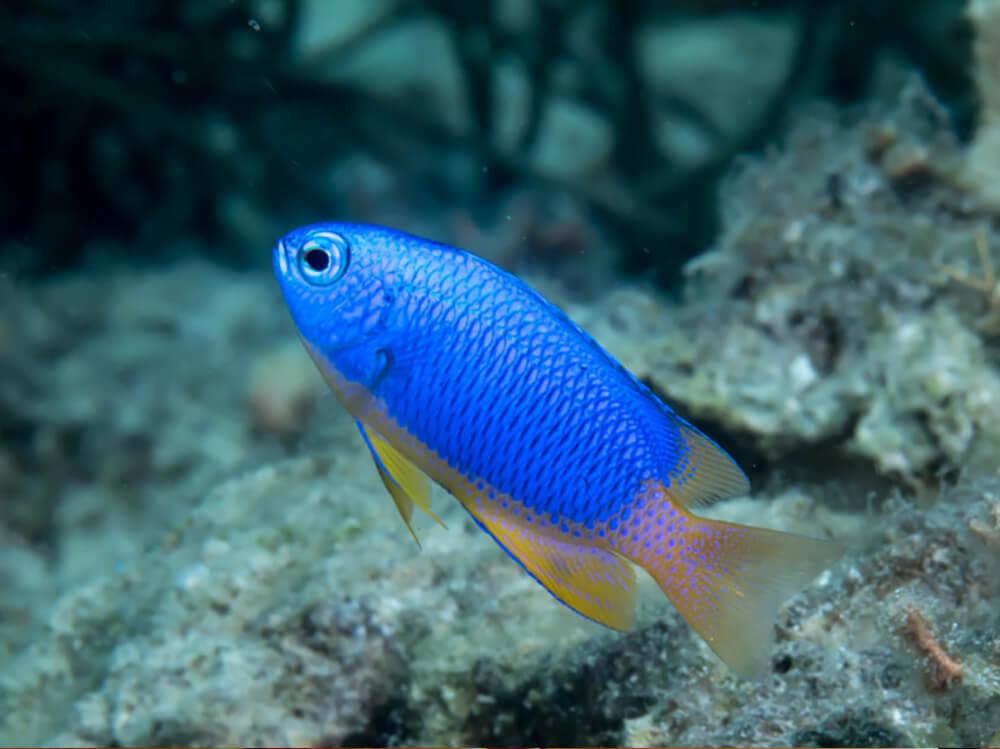 Damselfish are some of the most colourful, abundant, cheap and hardy fish available to the marine keeper, but they can have their drawbacks. Here’s the Swell UK Guide to Damsels.

Damselfish inhabit the tropical oceans of the world and are associated with coral reefs from the Atlantic to the Indian and Pacific Oceans, the Red Sea to the Barrier Reef, Indonesia and beyond. They’re often the first reef fish to be spotted by tourists and their colour and abundance make sure they always appear on underwater wildlife documentaries too.

Every saltwater fish needs its niche in order to survive. For most damsels that means territoriality and aggression, farming their own patch of algae to feed off and protecting it from the hungry mouths of others. For the Chromis its about shoaling in huge number, dazzling would-be predators with shoal size and dashing into the branches of staghorn corals after feeding on zooplankton out in open water. Clownfish are actually a type of damselfish, using territorial aggression to live within and protect sea anemones, the stinging cells of the anemones offering protection to the clowns from large predators.

Damselfish are tough and easy to feed with a mainly omnivorous diet. They can even tolerate less than perfect water quality, making them the go-to fish for new saltwater aquariums. The problem with them is their territoriality which they then use to take over part of all of the aquarium, chasing, bullying and even killing other marine fish. Domino damselfish and Humbugs are the worst for this and are often returned to the store after a few months.

And although kept in high number in retail tanks, the blue damsels quickly whittle their own numbers down to just one or two fish if you introduce a group to a saltwater aquarium. Add males and females, a pair will form and they will set about eliminating others of their kind in the tank, much to the dismay of the owner. A pair of damsels can be troublesome to other species too as they will violently defend rocks and prevent other fish like gobies from using them, with bad long term consequences.

The exception to the damselfish rule are the Chromis however. Open water plankton feeders, they are peaceful and reef safe, only rarely taking to the substrate to spawn. Green chromis are widely available and cheap, and although you’ll want something more exotic and colourful as first fish, there are few species which are more suitable. Their subtle blue/green coloration comes to life under bright light, and when they are kept in groups of ten or more. Combine a group of Anthias, Green Chromis and a Yellow tang in a large reef tank and it can result in a spectacular visual spectacle.

A single Yellowtail blue damsel is suitable for tanks of around two feet in length and 170 litres in volume. A group of five or more Green Chromis require a tank of three feet in length and 250 litres in order to give them room to swim up and down. Damselfish can be kept in fish-only tanks or reef tanks and will mix with any aquarium fish which aren’t large enough to eat them but avoid mixing aggressive species with small, nano-sized gobies. Tough species can even be mixed with triggerfish, pufferfish and large angelfish, being more than capable of holding their own with larger tankmates.

A damselfish tank can be as simple as a tropical tank converted to salt, right through to a full-blown hard coral reef system. Although known for being tolerant of poor water and extremely hardy this should never be tested and the tank should be matured first using beneficial bacteria, and the water tested regularly in the normal way. Protein skimmers, reactors and UV sterilisers will all help to cleanse the water and provide a more stable saltwater tank.

Its recommended that all new fish are quarantined first to try and prevent the introduction of disease to the main display tank.