The Swell guide to brackish fish 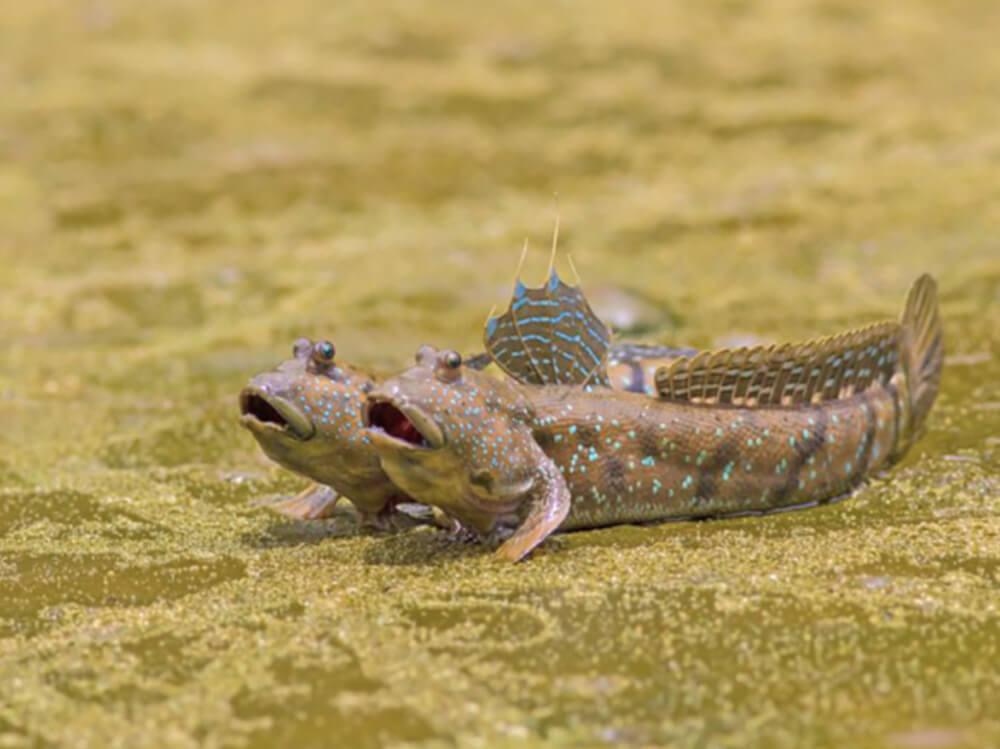 Brackish fish are some of the most well known, distinctive, characterful fish available.

They include species like Archerfish which can spit jets of water at insects in the trees above, Mudskippers which can crawl onto land, and many species of pufferfish. A brackish aquarium can be easy to set up and run and is guaranteed to be the talking point of your home.

What does brackish mean?

Brackish means water that contains marine salt, although when we refer to brackish water we are talking about water which is halfway between freshwater and saltwater. Brackish habitats occur all over the world where fresh meets saltwater on coasts and at river mouths and estuaries. Many of the tropical brackish water fish we keep live amongst mangrove trees and simulating the look of a mangrove swamp with vertical roots and branches sticking out of the water can look really effective. The fish like it too.

What brackish water aquarium fish can I keep?

There are several species of Archer fish and Mudskipper, as well as Monos and Scats. Figure 8 puffer and Green spotted pufferfish are popular brackish water fish because of the shape, pattern and activity, and you can even get brackish Shark catfish and brackish cichlids like Orange and Silver Chromides. Lots of gobies are brackish like Knight and Bumblebee gobies, and Black and Sailfin molly fish are brackish too and will do much better when kept in brackish water that contains aquarium salt.

How to set up a tank for brackish fish species

A brackish tank doesn’t need to be complicated and any freshwater set up can become brackish. Archers, Monos, Scats and Shark catfish are large fish, however, so a community of them would need to be in a large aquarium, in excess of 600 litres, although tiny Bumblebee gobies could be kept in nano-sized brackish tanks as small as 30 litres. As well as a tank you’ll need a filter, heater, lighting and decor.

Use fine sand or coral sand for the substrate, rocks, and wood. Mudskippers actually need to be able to leave the water and breathe air, so build platforms and perches above the waterline that they can hall out onto. If you place wood above the waterline Archerfish will spit water at food items you put there, so for the authentic mudskipper and Archerfish experience, a glass terrarium with large land section can be really effective and provide environmental enrichment for these bizarre species. Fit a lid to the tank to prevent escapees.

How to make brackish aquarium water

Tap water is fine to fill a brackish water aquarium, and then you use marine salt and a hydrometer to add salt to the water and test how salty it is. Fill the tank and plug in the heater and filter first, as the temperature of the water affects the salt reading. The water flow from the filter will also help to dissolve the salt. Add salt until the reading is 1.005-1.010s.g. The great thing about brackish aquarium fish is that they are very tolerant of the salt level in the water and may even travel between full salt and totally freshwater in the space of a day in the wild. But use marine salt instead of tonic salt for freshwater fish as it will also help to buffer pH.

The one important thing to note about salt is that it stays in the tank when water evaporates, so if you just leave open-topped brackish water aquariums the water level will go down and the water will become saltier. When the tank evaporates top it up with fresh water. Only when you siphon some water out of the system during a water change should you replace it with more brackish water, and then you would dissolve the salt in the water in the bucket first, before taking a reading with the hydrometer and pouring it into the tank.

Use test kits and filter bacteria and mature the system in the normal way. Mollies are the hardiest fish from those mentioned above so they are best to go in first and to mature the system with. Leave live plants out as they won’t grow in salty water but jungle vines for reptiles can look really effective when hung from the tank. Large marine systems with sumps can also be run as brackish systems, so the ability to go brackish in tropical tanks, terrariums and marine tanks offers the ultimate in versatility.