How to keep clownfish

Categories: AquariumsReefkeepingFish
Check our the most frequently asked questions on the ever-popular star of Finding Nemo, the Clownfish, and our experts answers to them. 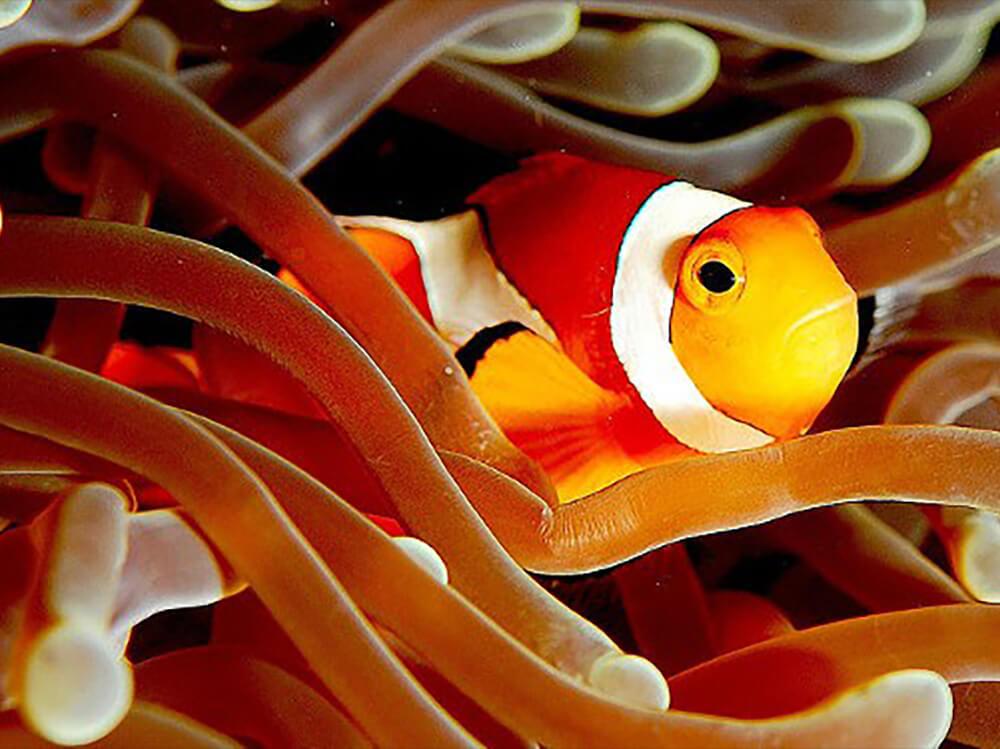 What species of Clownfish is Nemo?

Can I keep them in my tank?

Yes, if you have a two-foot-long tank minimum, a filter, light, heater, saltwater, a hydrometer, thermometer, food, decor and test kits you can keep Common clownfish. They are one of the easiest marine fish to keep but like all fresh and saltwater fish, some key rules apply. They must have clean, well-filtered water with no ammonia or nitrite, and a mature filter to convert their waste.

How much are they?

Common clownfish are typically upwards of £20 each in the shops. Some designer clownfish can be over £100 each. Sometimes more.

In the wild, all clownfish need anemones and they have a symbiotic relationship with them whereby they both protect each other from being eaten. In the aquarium, clownfish don’t need anemones, although much of that lovely symbiosis will also be lost.

What do they eat?

Clownfish will eat marine flake and pellets, frozen artemia and mysis. They are easy to feed.

How long do they live for?

They may live for twenty years in captivity, though usually a lot less. 10 years plus is a good age for a clownfish.

What fish can I keep them with?

Clownfish mix with lots of other marine fish species including wrasses, gobies, surgeonfish, butterflyfish, damsels, dottybacks, foxfaces and more. As long as the other fish aren’t large enough to eat them (like Lionfish,) Clownfish usually get on with them. The biggest threat to Clownfish in the aquarium is other Clownfish, even their own species!

Are clownfish taken from the wild?

Some are, but the Common and Percula clowns we mostly see for sale are all captive-bred. Designer clownfish are entirely captive-bred and line bred for pattern, and don’t exist in the wild.

How can I breed clownfish?

With difficulty. Clownfish can change sex from male to female, so in theory if you buy any two juvenile clownfish of the same species one will become female, one will become male and they might become a mated pair. If they do, then sooner or later they will lay eggs, but the eggs go through a critical pelagic stage where they float off and leave the care of their parents before turning into proper fry. This is the difficult stage as they are difficult to feed and get sucked into filters. Professional breeders can do it but the chances of baby clownfish surviving to grow up in your reef tank are zero.

Can I keep black and orange ones together?

Yes, although these are the closely related Percula clowns. You could have one orange perc and one black, or one black and one designer clown like a Platinum, or two different designer clownfish together. Stick to just two though as three or four usually ends in bullying, with just two remaining, even in large tanks.

Can I keep different clownfish species together?

It’s not advised as the more aggressive species (like Maroon or Tomato clowns,) will bully and often kill the smaller more placid Common and Percula clowns.

So I know they don’t need anemones but can I get one?

If you’re a new marine keeper avoid them as they are difficult to keep. If you have a successful reef tank and can keep corals successfully long term, you have a chance, as they require similar light, flow and water parameters. Choose a red bubble tip anemone as these are often cultured, and one of the easiest to keep. Avoid Carpet, Ritteri and Malu anemones as they are all very difficult long term.

What do I need to know before I buy?

Very small clownfish need to be fed several times per day and aren’t very hardy. Choose specimens of 5cm if you can. Always choose tank bred over occasional wild-caught Percula clowns as they can be tricky too. Tank bred clowns are prone to jumping, so fit a cover net to your tank.

Do I need to have fishkeeping experience to keep clownfish?

It definitely helps, as you will better understand water quality, fish health, aggression and tank maintenance. You can start from scratch with marines but you’ll need to do lots of reading and ask lots of questions. Some equipment is essential for life support and shouldn’t be skimped on. Bigger tanks are better with marines as the water is more stable.