How to set up a nano reef tank

Categories: Reefkeeping
Reef tanks don't need to be huge, you can create a stunning reef aquascape in a nano tank! Read our help guide to help you learn all you need to know. 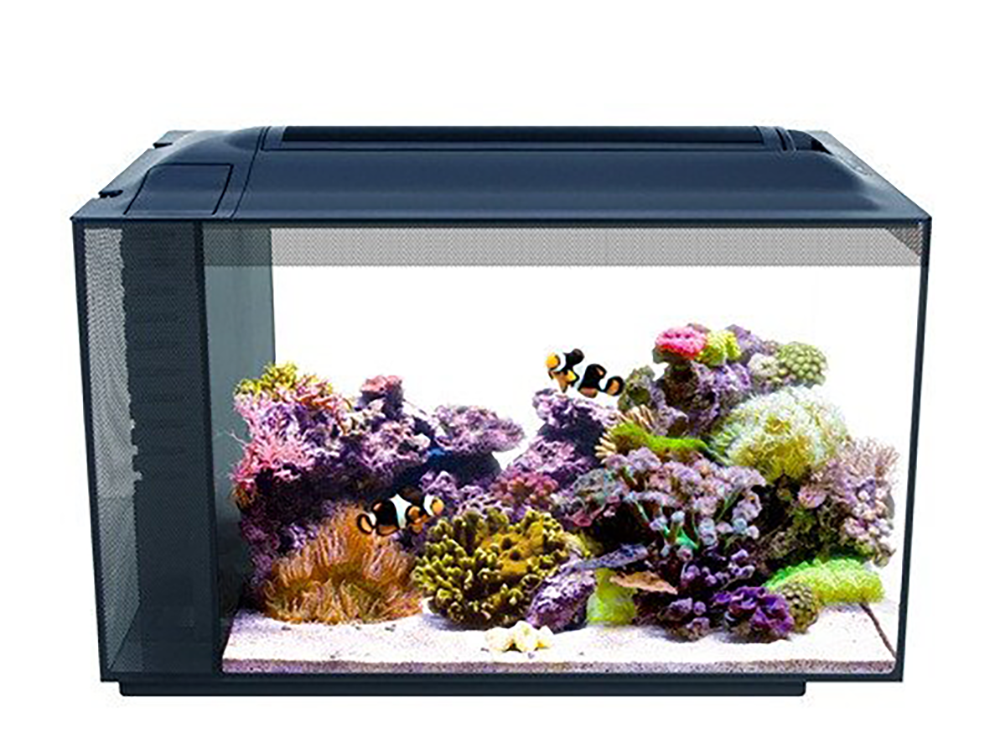 Getting into marines in a small way? Here’s how:

To be classed as a nano marine tank, nano tanks should be 50 litres or less, although bigger is always better for marine, and all tanks, even large ones, are nano when compared to the ocean. Bigger tanks are more stable when it comes to temperature and water conditions, and they enable you to keep more of the iconic reef fish.

Tangs, for example, are saltwater fish which require a reef aquarium of four feet in length or more, so think long and hard about your nano tank choice. Are you going nano because of lack of space or budget? Or do you just want something small? If you are just getting into marines and figure that small is the best way to start getting into reef tanks think again, as a larger tank of 180 litres or more would actually be much better for beginners.

Nano reef tanks still need much of the equipment that their larger counterparts do including wavemakers, protein skimmers, auto top ups, reactors and high powered lighting, so choose a tank which is aimed specifically at being a reef tank, and one where you can swap out, add and upgrade extra equipment in the long term.

Nano reefs have only really been possible since LED lighting was introduced to the aquarium market. Bright yet cool running and small, LEDs pack a lot of light into a small package, and corals need bright light. Choose a nano reef aquarium that comes with reef spec LED light (with blue LEDs included,) or a nano tank where the hood and lighting system can be completely removed in order for you to be able to clamp a decent reef spec LED light to it.

An open-topped tank will enable any light to be fitted, as well as providing provision for a protein skimmer, which must be able to stick up above the waterline.

Heating a nano reef is just as straightforward as heating a standard tropical aquarium. Use a combined heater/thermostat to heat the water to 25C. You’ll need one watt of heat per litre of water, so a 50 watt heater for a 50 litre tank.

Depending on where the tank is situated, you may actually have more of an issue with cooling it in summer months. If this is the case, an open-topped tank is also advantageous as cooling fans can be clipped to it and if you’re nano reef crazy, you can even source a nano-sized refrigerant cooler.

Most nano reef tanks come with one return pump built-in but look to add a small wavemaker to make that total turnover up to 20 times per hour. So 1000lph in a 50-litre tank. Controllable wavemakers are best as they can be turned down.

Protein skimmers are extra filters which are aimed at removing some of the organic waste produced by saltwater fish before its broken down by the filter. Lots of nano sized skimmers are available, though try to get the most expensive one you can afford as they will perform better than a budget one. Skimmers are important for cleansing marine tanks and aid oxygen levels and algae control. Ensure the facility to add a protein skimmer to any tank you intend as a nano reef.

A nano reef will need mechanical, biological and chemical filtration. That means sponge or filter wool to trap particles, ceramic media to provide a home for bacteria and carbon to chemically clean the water. A really important chemical media to include also is phosphate remover. Place it in a bag in the filter or better still put it inside a nano-sized media reactor.

Phosphate causes algae and slows coral growth and phosphate control is essential for any successful reef tank. Change carbon and phosphate media once a month and throw away dirty filter floss and rep[lace as often as you can. The use of mechanical filtration and protein skimming are two forms of nutrient export - also key to a good reef tank.

One thing there aren’t nano versions of however are all the other items necessary to monitor the saltwater tank in one neat nano reef tank kit. You’ll need a thermometer, refractometer to test salt levels and test kits for KH, Calcium, Magnesium, Nitrate and Phosphate. You also need a net, an algae pad, a bucket, and a siphon tube.