How to get rid of algae in an aquarium

Categories: AquariumsAlgae and Pests
Algae is the bane of many aquatic keepers life, but there are simple ways to prevent and get rid of it. Read our help guide to learn how. 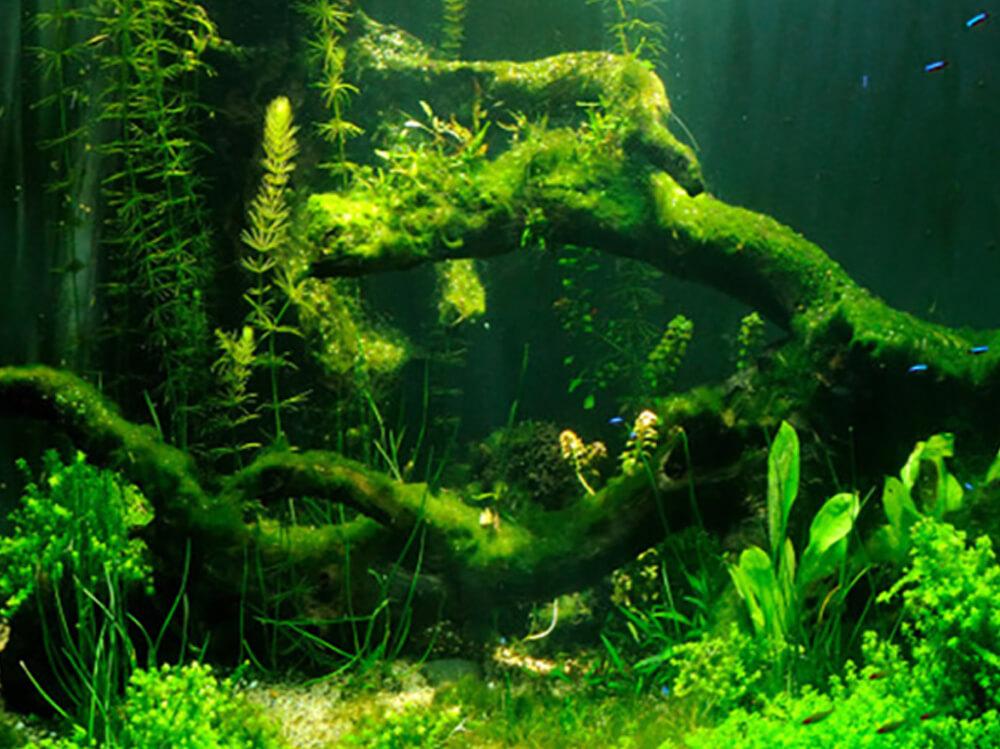 Algae is a very basic plant which can make its own food via photosynthesis, from light. They are typically very small, and aquatic, although they’re in a huge group ranging from that tiny single celled algae that cause green water, to Seaweeds, and more.

Algae were some of the very first lifeforms on earth and are present on every continent today, both land and sea. They can tolerate hugely varying conditions from freezing to near boiling, freshwater to saltier than the sea, and have adapted to evolve and inhabit virtually everywhere on earth. In our aquariums, it typically manifests itself as a green covering on glass and decor, but it can take many other forms too.

Where does algae come from?

Algae spores can be introduced to an aquarium on plant leaves or in fish bag water, but even in aquariums which were set up and totally sterile, with no plants, fish water or other lifeforms, algae can still start to grow. Algae spores can also be airborne and are everywhere where us humans are. So if its a coldwater, tropical or marine fish tank, or even a barrel of reverse osmosis water, if light can get to it, algae will grow.

How do I stop algae?

You wouldn’t be able to stop algae growth altogether in your aquarium, unless it was kept in complete darkness at all times. However there are lots of ways to control it:

Cut the lighting down

If your aquarium contains live plants or corals, they will need the lights to be on for a minimum of eight hours per day, but not more than twelve. If you don’t have anything that actually require light to grow, and you have bad algae, try only having the lights on when you are there in front of the tank, viewing it.

Fish don’t mind ambient room light (many species prefer low light,) so your fish won’t suffer and you’ll get less algae as a result. For planted and reef tanks make sure that you don’t exceed 12 hours of light per day, and that you aren't using more light than you need. Some LED lights can be dimmed, faded in and faded out, and directed specifically to where the plant or coral is, meaning less light is wasted, and less light spills onto the front glass, causing nuisance algae.

Mother nature has many allies that will graze and consume algae for you. For both fresh and saltwater, an army of snails, shrimp and algae-eating fish can be deployed to graze algae for you, helping to keep it in check, getting into places you can’t reach, and chomping on it 24 hours per day. Many species require algae in their diets too.

Add algae eaters when the first algae growths become visible and they will help to control it. Algae eaters won’t eat all types of algae (more about that below) and also make sure that their diets are supplemented with species specific foods, like Shrimp food, or algae wafers or tablets.

Proprietary algae-based foods will also include essential vitamins for algae grazing shrimp and fish. If the algae is consumed entirely algae eaters will go hungry, so then they will need regular feeding, just like your other fish.

As well as needing light, algae also need nutrients in order to thrive. In the aquarium, algae nutrients can come in the form of nitrate and phosphates. Nitrate is the byproduct of biological filtration and builds up, and phosphates can come from fish food, fish waste, and tap water.

Water changes are a very simple way of controlling nuisance algae. As stated above nutrient levels can be lowered by water changes, but it also gives you an excuse to physically remove algae during maintenance. As part of your weekly routine, algae-wipe the glass, scrub plant leaves and decor, and then syphon out any algae scrapings with a gravel vacuum.

Clean your filter sponge in the bucket of dirty tank water and then filter maintenance, tank maintenance and algae removal can all be done in one go. Changing water helps to physically lower the amount of algae spores in the aquarium, and old tank water can be reused to water your house or garden plants.

One of the most nuisance types of algae in the aquarium, slime algae, isn’t algae at all. Belonging to the genus Cyanobacteria, as its scientific name suggests, Slime algae is actually bacteria, not algae at all, but it grows and behaves in a similar way, smothering surfaces and thriving only in tanks with light and nutrients.

The downside with this nuisance bacteria is that algae eaters have no desire to eat it. They won’t touch it in fact, and it can even be slightly toxic to some lifeforms. It’s typically blue/green in freshwater tanks and red in marine tanks.

The good news is that Cyanobacteria can be tackled like conventional algae, by scraping and brushing it off surfaces, then physically syphoning it out. Regular maintenance is key with Cyano, along with lots of water changes, and strong water flow to prevent the dead spots that this slime likes best.