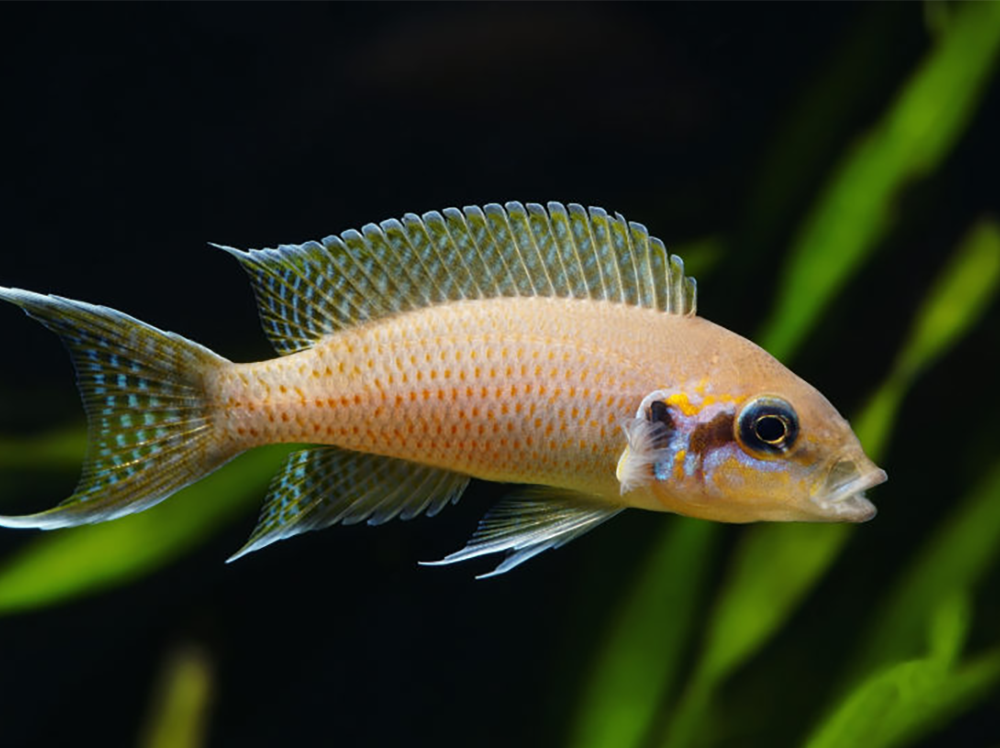 Convict cichlids display all the cichlid traits that are typical of the group. They’re tough, hardy, feisty fish that will thrive in virtually any freshwater aquarium situation. But the one thing they do best is breed. Male fish are larger with bigger heads, longer bodies and longer fins. Females are shorter bodied and can be told apart by a flash of orange and yellow on their bellies when sexually mature. Place a male and female together and if the water is good they will usually spawn within days. Females will breed at a small size too, and it's common to see large males paired off with tiny females.

Convicts are pair-forming substrate spawners that lay eggs and then protect them and the resultant fry. A pair can be housed in a tank of 60cm in length, but the pair protect their baby fish aggressively so should not be combined with any other fish in a community tank when breeding. Convicts are probably the easiest of all cichlids to breed.

Also known as Lyretail cichlids, Brichardi, or even The Princess of Burundi, Fairy cichlids are African cichlids and come from the hard, alkaline waters of Lake Tanganyika in East Africa. They stay small at 3” maximum length and although brown/grey in colour, their fin extensions, bright eyes and gill markings make them popular fish. They’re easy to keep and breed too.

Fairy cichlids are pair forming egg depositors too, laying eggs in caves and then protecting their tiny fry from all comers. What makes them different to all other egg-laying cichlids however is the use of older siblings to also muck in and protect the fry, forming large family groups consisting of fish of all ages all working together to protect successive batches of fry.

Fairy cichlids suit hard water tanks and ideally Lake Tanganyika biotope aquariums full of rocks. They can be kept in aquariums as small as 60cm in length but in 90cm tanks and over they will breed while allowing other Tanganyikan cichlids to coexist in the same tank. As long as there are lots of territories and hiding places. Watching a group of fairy cichlids all interacting and working as a family unit is a wonderful thing.

Jewel cichlids come from West Africa and are popular, widely available and cheap. When settled they can be bright red in colour with bright blue spots and are easy to keep, although they can be troublesome in community aquaria with small aquarium fish. Male Jewels are larger and longer bodied, while female Jewels become plump and round in the belly when developing eggs. Jewel cichlids are easy to breed, the pair laying eggs on a stone or piece of wood and protecting them from other fish. As the fry develop the female is chased away and the male does the remainder of the fry care.

Although easy to breed Jewel cichlids may attack any rival fish including their own kind when breeding. They are best bred in a large tank with room for the other fish to move out of the way. Fast, medium-sized non-cichlids make the best tank mates like Long-finned Brycinus tetras or move the Jewels to a separate tank, but keep an eye on the female as the male will turn on her as the days go on.

Red zebras offer a different kind of cichlid breeding behaviour as they are mouthbrooders. Coming from Lake Malawi in Africa, Red Zebras don’t form pairs, instead, coming together only for a few seconds before the male chases the female away. They lay large eggs which the female immediately picks up and takes into her mouth, where she keeps them for roughly a month, first as eggs and then as fry, before spitting them out into the rocks. She won’t feed during this time.

Malawi cichlids need large tanks and should be kept in numbers so that the hyper dominant males can’t take over the whole tank. Females need no help when mouthbrooding but if you want the fry to survive in the main tank when she spits them out, the tank should be full of rocks and free of fry predators like Nimbochromis and Dimidiochromis. An experienced eye will be able to tell when females are holding eggs as their throats will look full yet they won’t feed. Females can be moved to a separate tank to spit out the fry, and then they can be raised independently of the parents.

Kribs have it all as they are small, colourful, easy to keep and easy to breed. Males have a spade-shaped tail and sometimes spots on their dorsal fin and tail fin. Females have bright pink bellies and are smaller, shorter and with shorter fins. Kribs do like to choose their own partners however but once paired they will look for a cave and hideaway for days before reemerging with a cloud of tiny, striped fry.

They herd their fry around the tank, looking for food and if the tank is large enough they will coexist with other fish even while breeding. But if you want to set up a dedicated breeding tank, a half coconut shell with a notch for a door makes the perfect Kribensis cave. Kribs are some of the most community-friendly of all cichlids and make good first cichlids and a good first cichlid breeding fish.