How to keep rainbowfish

Categories: AquariumsFish
Rainbowfish are tropical freshwater fish so named because of the variety of bright colours displayed by mature males. 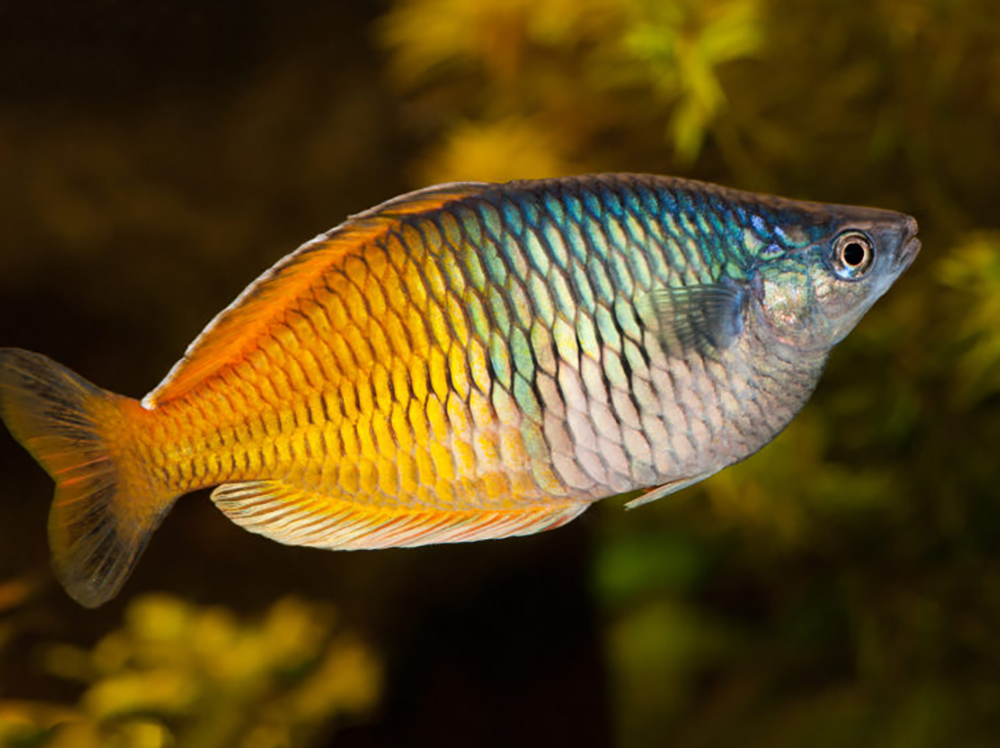 Rainbowfish are tropical freshwater fish so named because of the variety of bright colours displayed by mature males. They originate from Australia, Papua New Guinea and Indonesia and inhabit streams, rivers, lakes and marshlands.

Rainbows are popular aquarium fish and Red, Blue, Boesemani and Neon dwarf rainbows are common in most aquatic stores. Although usually seen as plain, washed-out juveniles, when adult, Rainbowfish are some of the most colourful of all tropical fish, with bright red, yellow, orange and metallic blue colours being common. Most are medium-sized species between 2 and 6” in length and although they can be feisty with each other when displaying, they are generally well behaved, model community fish.

How to set up a tank for rainbowfish

All rainbowfish are active species and Melanotaenia and Glossolepis should be kept in tanks minimum 90cm long. The exceptions are the dwarf Melanotaenia like Praecox and McCullochi, which stay under three inches in length. For smaller tanks and nano tanks there are the Blue Eyes from the genus Pseudomugil, which are lovely, tiny fish, and well worth looking out for.

Larger rainbows need either an internal or external power filter, a heater, and colour enhancing lighting to bring out their colours. Small rainbows are fine with air-powered sponge filters or small internal filters.

How to decorate a rainbowfish tank

Use large pebbles, gravel and bogwood to decorate the tank and simulate a clearwater creek or lake bottom. Decorate with Java fern, Vallisneria or plastic plants, but leave lots of room for swimming. For the tiny species, mosses and carpeting plants look great and they are popular in nature aquariums and aquascapes. Use bright light, CO2 and fertilisers to create an underwater garden. Use a black background to accentuate their colours or install a 3D structured background to create a natural-looking underwater scene.

Which tankmates can go with rainbowfish?

Medium and large rainbowfish are compatible with hundreds of other fish species from loaches and catfish to barbs, medium-sized tetras, rasboras, gourami, angelfish and other medium-sized, peaceful cichlids. For the tiny species combine with other nano fish like tetras, pygmy rasbora, sparkling gourami, Otocinclus and shrimp.

Many people dedicate their whole aquariums to rainbowfish and build up a collection of species that mature and become more colourful with age. Male Melanotaenia and Glossolepis become deeper bodied with age too and develop prominent humped backs. The bigger the tank the better for adults from those genera as then you get the best out of them, can combine several species, and as they are long-lived they will provide a long term centrepiece display.

What to feed rainbowfish

Rainbowfish are ravenous feeders which do best on a varied diet of colour enhancing flake, pellets and granules, frozen and live foods. Feed little and often to build body size and weight, and if you can’t be there to feed frequently, invest in an automatic feeder.

How to breed rainbowfish

Rainbowfish are non-pair forming egg scatterers. Males do elaborate displays involving shimmying, fin flaring and circling around the females, and some species can flash yellow on their heads. They entice females to visit them and then eggs are released in midwater before sinking down into plants or gravel. The parents don’t exhibit any parental care and will eat their own eggs and fry, so use spawning mops and move the eggs to a separate tank if you want to rear them.