How to keep your fish pond cool in summer

Categories: PondsEquipment
Hot weather can cause real problems for some pond fish and it’s in heatwaves and during warm, muggy nights that your fish are most likely to succumb. 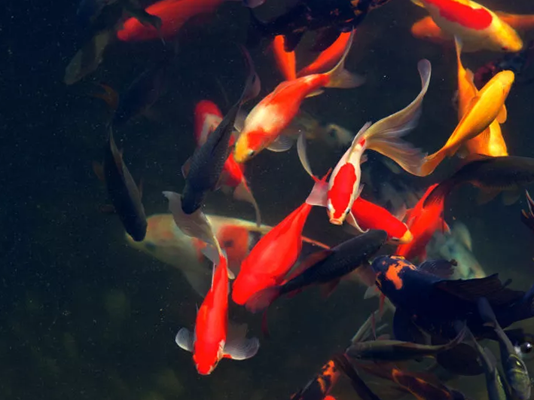 Hot weather can cause real problems for some pond fish and it’s in heatwaves and during warm, muggy nights that your fish are most likely to succumb. Coldwater fish have a higher oxygen demand than tropical fish, yet warm water holds less oxygen.

So as your pond water warms up the problem becomes two-fold. The fish demand more oxygen as the heat increases their metabolic rates, yet the water holds less oxygen. So the biggest killer of pond fish isn’t always the high temperatures, its the lower oxygen levels that go with it.

How to increase oxygen levels in a pond

Aquatic plants can produce oxygen in the daytime as they photosynthesize, but do the reverse at night, so should not be relied upon as a suitable oxygenator. Ponds can literally become choked by plants and as they only oxygenate for half the time they are not the solution.

Oxygenation occurs by agitating the water surface, allowing CO2 to diffuse out and oxygen to diffuse in. A pond pump running a fountain jet and/or a cascading waterfall is one of the best ways to introduce oxygen into a pond. Fountains and waterfalls massively increase the amount of water in contact with the air, as well as agitating the surface of the pond, so when the weather is really hot, run one or both for 24 hours per day.

Neighbours may not appreciate the sound of a fountain or waterfall at night, however, and the risk with using your pond pump to oxygenate is that if the pump blocks and stops, oxygenation as well as filtration stops, causing a rapid downward spiral.

Instead the ideal is to install a pond airpump and airstones which run independently of any water pumps, pumping air into the pond, agitating the surface as well as diffusing oxygen into the water as it does so. Pond airpumps can be audible when up very close, but your neighbours won’t hear it, especially if you place the pump inside a housing.

Airpumps are an excellent piece of equipment for any pond, as they can be used to aid breathing if ammonia or nitrite is present, if fish get sick, when using medications as well as in warm weather. Many koi keepers run additional airstones in their ponds year-round, and oxygen-rich water aids aerobic (oxygen demanding,) beneficial filter bacteria as well.

You can’t move your pond but you can introduce shading to prevent direct sun from overheating the water. Tie a garden sail over the pond to create shade in the daytime, or better still build a pergola and use garden shading over the top of that. Shade your pond and you will get less algae, as well as making it less visible to herons, and less accessible if they want to fly in.

Some ponds are more prone to overheating than others. Those in full sun or in South facing positions will receive the most sun and be the most likely to overheat. A large volume of water in relation to surface area will also heat less quickly than a small volume with a large surface area. So provide a deep area and think bowl shape in profile, not satellite dish, when designing a fish pond. If you need to assess the amount of pond liner you'll need for your pond, you can use our handy pond liner calculator.

What to do if your pond fish are gasping

If you find them gasping, make sure that the pump and filter are on, and that the outlet from the pump or pond hose is agitating the water surface as much as possible. In severe cases a garden hosepipe can be sprayed across the surface of the water, cooling it down and introducing oxygen, as long as you pour in the right amount of pond tapsafe first, or you connect the hose to an inline dechlorinator.