The swell guide to freshwater sharks 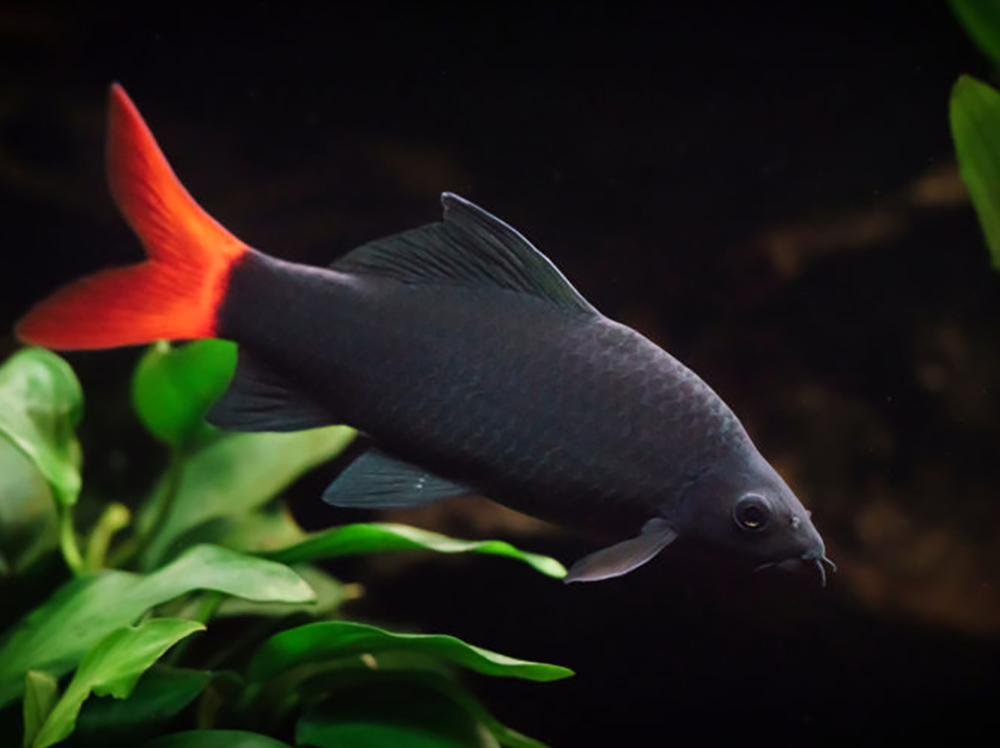 Freshwater sharks are some of the most popular tropical fish and their iconic looks and naming have ensure their popularity.

They aren’t true sharks at all of course and Red-Tailed Black, Red Finned and Silver sharks aren’t even closely related to saltwater sharks, and are actually Cypriniformes, like carp, barbs, rasboras, loaches and danios.

They originate in rivers and streams in South East Asia with the Silver shark or Bala shark coming from Indonesia and the Red-tail and Red finned or rainbow shark coming from Thailand and other areas. It’s hard to imagine seeing wild Red-Tailed black sharks swimming around in clearwater rivers with their jet black bodies, and crimson red tails, but its clear to see why they became such popular fish.

Red-tailed black sharks and Red Finned or Rainbow sharks are two different species but they should be kept in the same way.  Red-tailed black sharks can be identified by their black bodies and red tails, whereas Red Finned sharks have grey bodies and all their fins are red. They both grow to an adult size of 6”/15cm when fully grown so the first consideration for their long term care should be a 48”/120cm aquarium.

They are territorial however so should not be mixed together or kept with others of their own kind. Add just one to a community of medium-sized fish but ensure that other similar shaped or similar coloured fish aren’t included as the shark may chase and harass them. Sadly that means that Clown Loach, another aquarium favourite and shark shaped, red finned fish may be off the menu due to competition for ground-dwelling space and hiding places.

To help manage their aggression, heavily decorate the tank with rocks, wood and lots of artificial or live plants, which will break up the line of sight and create natural boundaries and territories. Epalzeorhnchus sharks love to graze algae so a combination of bright light and lots of decor should provide numerous surfaces for the shark to graze, also helping to keep it occupied during the day.

Feed sinking tablet and algae-based foods too, as most shark aggression happens at feeding time when it feels it needs to chase other fish away from food. Feed regularly throughout the day with appropriate sinking foods and your shark should feel less of a need to chase when flake is offered to the others, fingers crossed!

All sharks are tolerant of slightly acidic, neutral or slightly hard water and are generally quite hardy fish, but despite this, good water quality should be maintained at all times by way of effective mechanical and biological filtration, and regular water changes.

Silver sharks are different from the other two in that they are a midwater shoaling species, which need the company of their own kind. Silver sharks are very peaceful, but the drawback with them however is their adult size of 12”/30cm, and when large, they can and will eat small fish like Neon tetras. Always sold as juveniles of just three inches in length, proper consideration should be taken for their long term care. Can you house a foot-long flighty fish, or even a group?

The fourth shark species is still relatively new to the hobby but goes by many names including Rosyline shark, Roseline, Redline torpedo barb and Denisoni barb, after its scientific name Puntius denisonii. Rosylines are adult at six inches and require groups of five or more, They are very peaceful, this time coming from rivers in India. They don’t like high temperatures however and have a high oxygen requirement, often being found at the base of waterfalls in the wild.

Other freshwater fish have been christened with the “shark” moniker too including the Paroon shark, Pangasius sanitwongsei, a huge migratory catfish that grows to four feet in length and its cousin the Iridescent shark which although popular and readily available, grows similarly large. The Iridescent shark can be a problem in the fish tank as they are cheap but few people know how large they grow Cigar sharks, Leptobarbus rubripinnis, very large, elongate barbs growing to over two feet in length and fond of jumping, and the silver apollo shark, Luciosoma setigerum, another cyprinid, this time adult at around 7”, but peaceful and surface-dwelling. Apollo sharks could mix with Rosyline, Red-tailed, Red-finned or Silver sharks in a large, long, river-themed aquarium. The Harlequin shark comes from Africa and share the same care requirements as Red tail sharks. Harlequin sharks make interesting additions to West African biotope tanks. The Violet blushing shark would suit an Indian themed river aquarium, although Columbian sharks, also known as Columbian shark catfish are large, predatory fish which need salt in their water. Finally there is the Chinese High Fin Banded Shark, another carp-like cypriniid which needs cool water, and is banned from sale in the UK. Bala sharks, roseline sharks and columbian shark catfish are all shoaling fish.

One true shark - the Bull shark - can travel up river estuaries and into freshwater rivers and lakes. Its a formidable species too and is capable of biting humans in shallow, cloudy river water. Bull sharks can be found in tropical river systems worldwide including in North and South America, India, Africa and Australia. They are not suitable for aquariums or even huge public aquariums due to their aggressive behaviour. So, yes, true sharks can be found in freshwater, but they aren't true freshwater fish. If you want freshwater sharks and have a large, furnished aquarium with other non-shark shaped fish, a Red tail shark can work. If you have a very large tropical fish tank the Silver shark or Bala shark is a good choice.