How to keep barbs in an aquarium

Categories: AquariumsFish
Barbs are a large group of tropical and temperate freshwater fish. They come from Africa and Asia and range in size from just a few cm in length to several feet long. 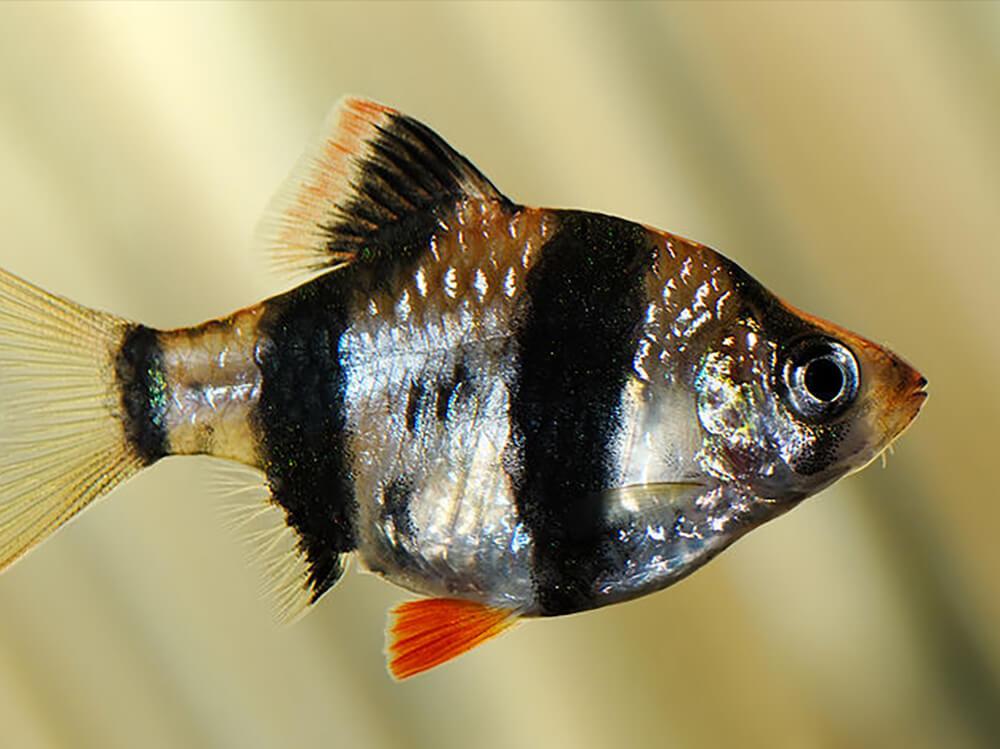 Barbs are a large group of tropical and temperate freshwater fish. They come from Africa and Asia and range in size from just a few cm in length to several feet long. The most famous barb is the Tiger barb, and it managed to single-handedly tar all barbs with the same fin nipping brush.

Tiger barbs can nip fins although it's more frequent in wild-caught fish, hungry fish and fish that aren’t kept in high enough number. Have a large shoal of say 20 Tiger barbs and they tend to keep their boisterousness to themselves and remove temptation like Angelfish, male guppies and Siamese fighters, and they shouldn’t be more trouble than any other tropical fish. But there are so many alternatives to Tiger barbs.

If you want to stay with the vertical Tiger stripes try the Six Banded Tiger Barb, Desmopuntius hexazona. Sold in the trade as the Pentazona Barb (a different species,) it's not a Tiger Barb at all and is very peaceful. It stays small, its colours improve over time and it will never nip fins. A model community fish.

If you crave colour how about Golden barbs, Barbodes semifasciolatus. These are bright yellow coloured fish that are very well behaved, medium-sized and easy to keep. They suit community aquariums of 90cm and 180 litres or more. Or Neon Rosy barbs, which are just as happy in unheated aquariums and are suitable for beginners too. The males are the colourful ones and buy a group and they should breed, scattering eggs in fine-leaved plants.

If your tank is 60cm and 54 litres or less, there are still barbs that are suitable. Male Cherry Barbs are bright red and adult at just a few cm. They are plant-friendly and can be bred. Checker barbs are more subtly coloured but really well behaved and peaceful. And if you want something rare for the collector, go for Jae Barbs or tiny Butterfly barbs from West Africa.

Tinfoil barbs are popular in large tanks but there is a lot more choice than them. Filament barbs and others in the genus Dawkinsia are active and need large tanks to exercise properly. Spanner barbs grow much larger than people think at over 8”, and Clown barbs are very peaceful and inexpensive. And if you want to see frenetic spawning action get a group of Arulius barbs, Dawkinsia tambraparniei.

How to set up a tank for barbs

Most barbs come from streams and rivers so a standard tank set up with gravel, rocks and bogwood, and a few plants will suit them just fine. The larger barbs appreciate stronger currents and high oxygen levels whereas the smaller species need more gentle flow. Use an internal power filter for small fish and an external power filter for larger species. Barbs don’t tend to like it too hot, so watch those tank temperatures and make sure there is sufficient oxygen.

Peaceful barbs can be some of the first fish to go into a new tank as they are generally hardy and disease resistant.

How to breed barbs in the aquarium

All barbs are non-pair forming egg scatterers, which come together for spawning and show no care for eggs and fry. In fact, they will try to eat them. Many species like Cherry barbs, Rosy barbs and Black ruby barbs are easy to sex because the male is much more colourful. If you want to breed them, add a mature group to a tank containing feathery leaved plants, large gravel or spawning mops and condition them with lots of frozen foods. Once they spawn, tiny eggs should be visible and all fish removed. Install an air-powered sponge filter and feed the fry on newly hatched brine shrimp.