How to keep Parrotfish

Categories: Fish
Parrotfish are a type of cichlid that is popular in tropical freshwater aquariums. Not to be confused with the saltwater parrotfish. 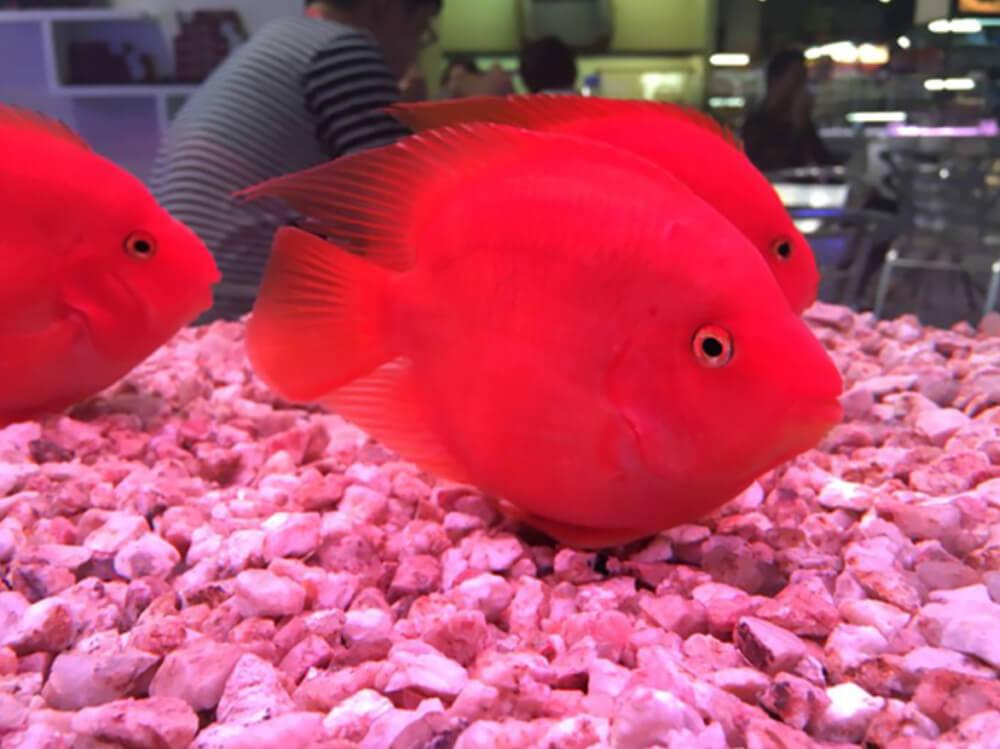 Parrotfish are a type of cichlid that is popular in tropical freshwater aquariums.

Not to be confused with the saltwater parrot fish which chew up coral reefs or the true Parrot cichlid, Hoplarchus psittacus, Parrots are a hybrid cichlid of unknown origin, popular for their chunky bodies, cute faces and bright orange or red colouration.

Most probably made from cross-breeding South or Central American cichlids, and further line-breeding for that shortened body and squashed face, parrot cichlids don’t exist in the wild and first came from fish farms in the far east about 30 years ago. Ancestral species are thought to include Gold severums, Heros severus, and Redhead cichlids, Vieja synspilum, although the Blood Parrot Cichlid are probably more likely the result of crossing two Central American species like Amphilophus citrinellus and Vieja synspilum than one South American and Central American cichlid.

Parrot fish are now hugely popular in places like Thailand, Singapore and China and have largely replaced fancy goldfish as the go-to man-made bright red aquarium fish, with red being a favoured colour in Chinese culture. They’re popular in the rest of the fishkeeping world too.

Parrot cichlids can grow large - up to 8-10”/20-25cm when adult, so need large aquariums of 120cm and 240 litres volume or larger long term. Stocky fish, they create a lot of waste, so need filtration to match from an external filter, with additional aeration from an airpump and airstone.

The tank should be decorated with fine gravel as large gravel grains can stick in their mouths, and use bogwood, stones or ornaments for hardscape. Parrot cichlids will eat live plants so either opt for tough species like Anubias, with strong, waxy leaves or opt for artificial aquarium plants instead. A dark background will make them stand out and colour enhancing lighting will really bring out the red and orange colouration.

Parrot cichlids are capable of eating small tropical fish like Neon tetras, so instead choose large-bodied but placid fish as tank mates like Angelfish, Gourami, Silver Dollars and if your tank is large enough, Silver sharks. Parrot cichlids are commonly mixed with many other cichlids from South American to Africans, but are best with their own kind or other placid, non-territorial species like Severums.

Parrot cichlids should be fed on a medium-sized cichlid pellet or stick food, to keep them healthy and enhance their red colouration. Frozen foods like bloodworm, brine shrimp, Krill and Mysis can also be offered.

Parrot cichlids often delight their owners by laying eggs on tank decor, although they almost always turn white because they are infertile eggs. Parrot cichlids may also pair off with non-parrot species and lay eggs with them, although those fry aren’t viable either. Clay pots make popular spawning sites.

How they are bred commercially is still something of a mystery, with rumours of the breeders sterilising the fish so that hobbyists can’t breed them, but no one is really sure why they can’t produce viable offspring when other popular hybrids like many Malawi cichlids can.

If you're a cichlid purist then Parrot cichlids aren't for you, and it's worth noting that brightly coloured Blue or Purple parrots have been injected with dye, and those and tattooed specimens should be avoided because they've been subjected to cruel practises. Hybridisation can make cichlid species conservation and identification really difficult too.

But if you want large blocks of red colour in a large community tank or mixed cichlid tank containing placid species and don't mind their background then look up Blood Parrot cichlids.