How to properly care for catfish

Categories: AquariumsFish
Catfish are an amazingly diverse group, named of course after their cat-like whiskers. They range in size from just a couple of cm to three metres in length. 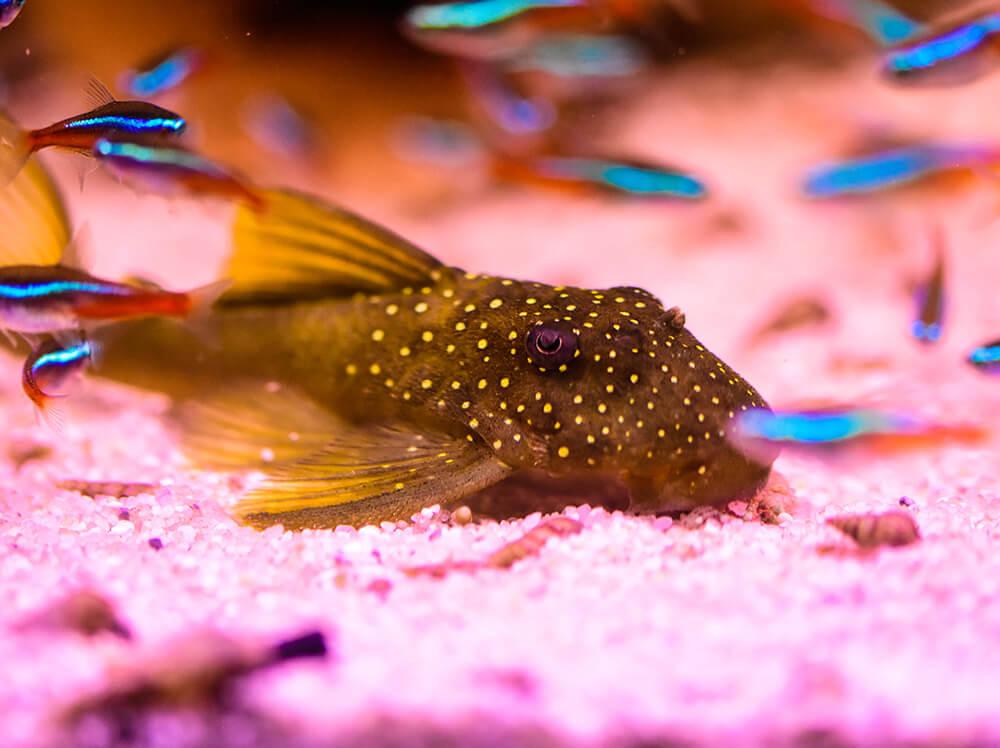 Catfish are an amazingly diverse group, named of course after their cat-like whiskers. They range in size from just a couple of cm to three metres in length and are some of the largest freshwater fish on the planet. They inhabit streams, rivers, lakes and swamps and can be found on every continent except Antarctica.

They’ve adapted to a huge range of feeding niches from algae and detritus to wood, other fish and even blood in the case of the parasitic Candiru catfish from South America. They’re popular food fish, sport fish and aquarium fish, with hundreds of species available for us to keep at home.

But catfish can have a hard time in the average aquarium. Often bought as “cleaners,” it's thought that they will get by on nuisance algae, uneaten food and the droppings of other fish, but catfish need feeding in their own right, and the right type of food for each species so that they don’t starve.

One of the most popular catfish species, the Common plec, is also one of the least suitable, as although very hardy they grow too large for all but the largest aquaria, make a mess and need to be rehomed.

A dirty substrate can actually be detrimental to the delicate barbels of substrate sifting species like Corydoras catfish and barbles can be eroded by sharp, unsuitable substrates and bacterial infection. And nocturnal species may miss out at feeding time altogether, outcompeted by daytime feeders and then further stressed by lack of suitable places to hide and rest during brightly lit, daylight hours.

Predatory catfish will eat smaller tankmates too, especially at night. They’re only doing what comes naturally…

Setting up for catfish

To set up a tank for catfish we must first make sure their individual needs are met. Many catfish species reach their maximum size in captivity so research their maximum length and make sure your tank will be big enough for them and their activity long term.

Many catfish species are also inflexible due to armour plating so the tank should be at least twice as wide as an adult individual and six times as long. So that’s a 36x12” tank for a six-inch fish and a 48x16” tank for an 8” fish, and so on. Do that and you won’t get any unpleasant surprises like a Sailfin plec growing to 18” in your four-foot tank, and outgrowing it.

Research if your catfish likes to live alone, or in groups, as this will also affect tank size. All Corydoras should be kept in large groups for example so you’re tank and filter will need to accommodate not just one but a group of them, as well as other fish.

Catfish need as much food and produce as much waste as any other type of fish, so for anything bigger than Corydoras that’s usually going to mean that external power filters are best. Many catfish inhabit fast-flowing rivers so don’t worry about flow being too strong. Some even live in river rapids or take on huge mass migrations, so exercise from a strong current can be good. No catfish appreciates a new tank, so pre-mature filters in the normal way.

Starting with the substrate, Catfish may have delicate barbles or even naked skin in some cases, so for virtually all species, fine, soft sand is best. For softwater species like those from the Amazon, the sand should be inert, meaning it won’t raise pH, but for Rift lake species like Synodontis petricola, sand that buffers pH can come in handy. Remember to keep all substrates clean in order to avoid infection.

Catfish love to hide, so consider it a must to have at least one hiding place per catfish or a large overhang where the whole group can hang out during the day. Natural materials are best for this so use bogwood for forest and lowland species and large stones for Rift Lake, Hillstream and rapids species. The more decor you provide, the more your secretive catfish are likely to come out.

Overhanging roots and plants can look very natural and the Upside-down catfish, Synodontis nigriventris, has even evolved to live its entire life upside down, under tree roots. Provide a bed of leaves for cryptic species like banjo cats and Pleco caves for breeding cave-dwelling plecos from the Rio Xingu.

Catfish don’t have to have plants in their tanks, but floating plants can further filter out bright light and provide shade and cover, making them feel more secure. Leave plants out altogether and you can dim that light right down, creating small, spotlit areas with energy-efficient LEDs.

Catfish can be grouped very loosely into how they feed by the shape of their mouths and whiskers. Suckermouthed plecos like to rasp their food from hard surfaces like rocks or wood. Some actually ingest wood, and few can get by on algae alone. Many plecos will also graze on fruit and vegetables, bloodworm, or even meaty foods. Use a pipe to drop food into catfish caves, feed after lights out or place a pipe in the tank that catfish can fit into but other fish can’t then place food in there. Offer a quality catfish diet and they will come out more.

Those with fine, feathery barbles are adapted to feel for invertebrates so need suitably small foods sprinkled in and amongst the substrate for them to find and dine on. Feed a combination of fine, sinking granules with frozen foods and feed little and often for these active fish. Place live bloodworm or Tubifex under the sand for Corydoras to find, just like in nature.

And those catfish with wide mouths and very long, wide barbles are predators. Efficient in day or night, predatory catfish use those long barbles to scan the surroundings for prey, giving them a much bigger “view” than they would normally get. Barbles are waved front and back, left and right to build up a 3D picture of their surroundings and if an unsuspecting fish comes within that field, it's snapped up. Even in complete darkness.

Feed predatory catfish on large sinking pellets for predatory fish and frozen prawns, cockle, mussel, Smelt, Whitebait and Lancefish. Feed every so often so the fish will gorge and then digest over the following few days like they would in the wild. And it should go without saying that long whiskered species like Pictus catfish shouldn’t be kept with small fish like Neon tetras.

Obsessed with catfish? You are not alone, and many aquarists specialise in them and breed them, with new discoveries being made all the time. Have a catfish-only tank and they won’t get outcompeted. There are even catfish for midwater like Glass catfish, Debauwie cats and some Wood cats. Shoaling species look particularly impressive in a large display, or why not create a biotope correct tank with species that live together naturally in the wild? They might even breed...