How to keep tetras 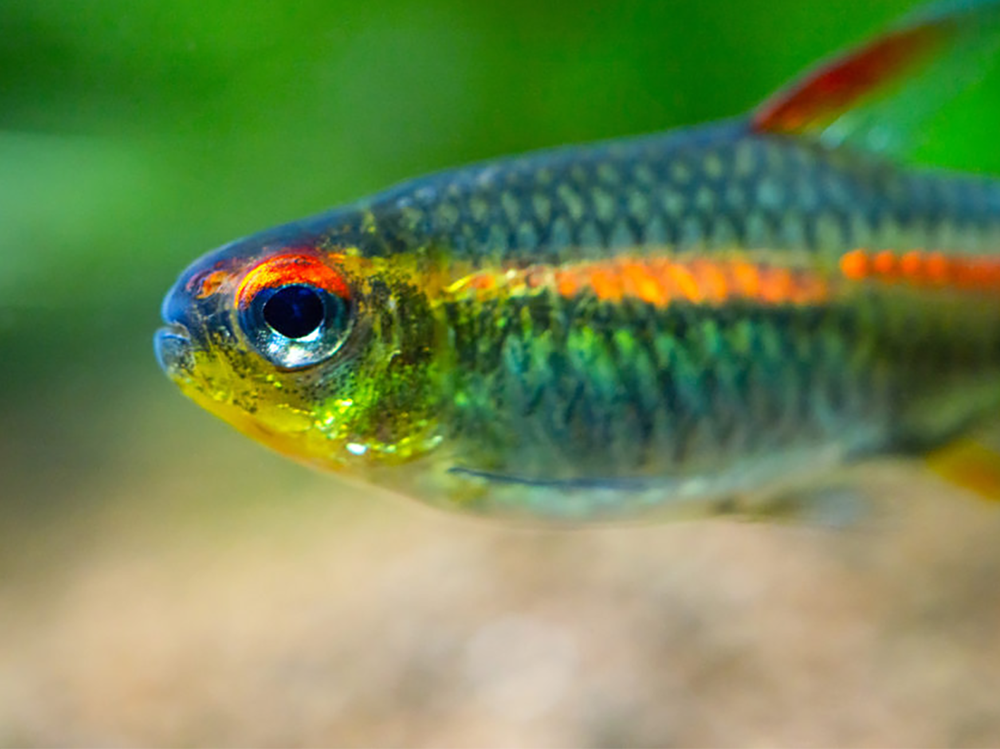 Small, colourful, undemanding, cheap, tetras have it all and few tropical community tanks run without them. Here’s what you need to know.

Tetras originate in the freshwaters of South America and West Africa. With a few exceptions, they inhabit streams, rivers and lakes and wetlands, with soft acidic water and a low pH. They belong to the family Characidae, a huge family which includes Piranha, and look at a close-up photo of a Cardinal tetra and you’ll see it has tiny teeth too! Characins range in size from tiny tetras like Ember tetras at just 2cm to Pacu, at over three feet in length.

Tetras can be kept in tanks as small as 30cm (suitable for nano species like Ember tetras,) but 40cm and over is necessary for a shoal of Neon tetras and 60cm (54 litres and over is best for most small, common South American species.) Congo tetras from West Africa and Bleeding heart tetras need much larger tanks as they can attain a size of 7.5cm/3” and are active species, requiring lots of swimming room. Consider 90cm and 180 litres an absolute minimum for these two, with 120cm/48” and 240 litres being better still.

You’ll need a filter, with virtually any style of filter being suitable for tetras as they don’t produce much waste. But the filter must be mature and the tank six weeks old or older as tetras aren’t tolerant of immature tanks or poor water quality. Ammonia and nitrite must be at zero at all times. Lighting can be subdued to show off those often reflective scales or bright for planted tanks, which tetras make the perfect, plant-friendly accompaniment for. Being mostly tropical species you’ll need a heater, set to an average temperature of 25C, depending on species.

Coming from forest streams, the tetra’s natural habitat has sand, silt, gravel or stony bottom with driftwood, fallen leaves and overhanging branches. Some lakes and rivers also contain aquatic vegetation which offers these small fish cover. Tetras show off their colours best against dark backgrounds but plants can be real, artificial or absent altogether. Decorate heavily in some areas and provide open areas in others. In large tanks areas of stronger or slacker water flow can be created, along with contrasting shady and brightly lit areas. Provide all this and the fish can then choose where they would rather be.

Tetras are mainly carnivores, eating tiny insects that fall down from above as well as insect larvae and aquatic invertebrates. The ideal diet will combine frozen Bloodworm, Daphnia, Copepods, Black mosquito larvae and a good quality flake food. Fruit Flies can be given as an occasional treat and watching tetras dash up to the surface to consume them looks very natural. Feed little and often as these small fish have fast metabolisms, especially the species from very warm waters. Automatic feeders can be deployed if you are out for long periods during the day.

In the wild tetras cohabit with other small fish species including Corydoras catfish, Pencilfish and Dwarf cichlids. Larger tetras like Congo tetras, Bleeding heart and Colombian redfin tetras, Hyphessobrycon colombianus, are suitable with larger, peaceful fish from Angelfish to Geophagus, Severums to Silver sharks. Compatible bottom-feeding species are recommended as tetras rarely if ever take food from the substrate. If seeking a mixed community tank, tetras are also compatible with Gourami, Rasbora, dwarf rainbowfish, small, peaceful barbs and livebearers.

Some tetra species like Blue tetras, Boehlkea fredcochui, Serpae tetras, and Dawn tetras, Aphyocharax paraguayensis, can be fin nippers, so don’t keep them alongside long-finned fish like male Siamese fighters or male guppies.

Most tetras should be kept in groups of 10 or more and may shoal in their hundreds in the wild.

With such a large group there will always be exceptions. For those with unheated, temperate tanks, Black widow tetras can be maintained at temperatures as low as 20 Celsius, and Buenos Aires tetras, Hyphessobrycon anisitsi, as low as 16 Celsius. Buenos Aires tetras are also good candidates for those seeking a medium-sized tetra that is tolerant of hard water.