What are Flowerhorn cichlids? 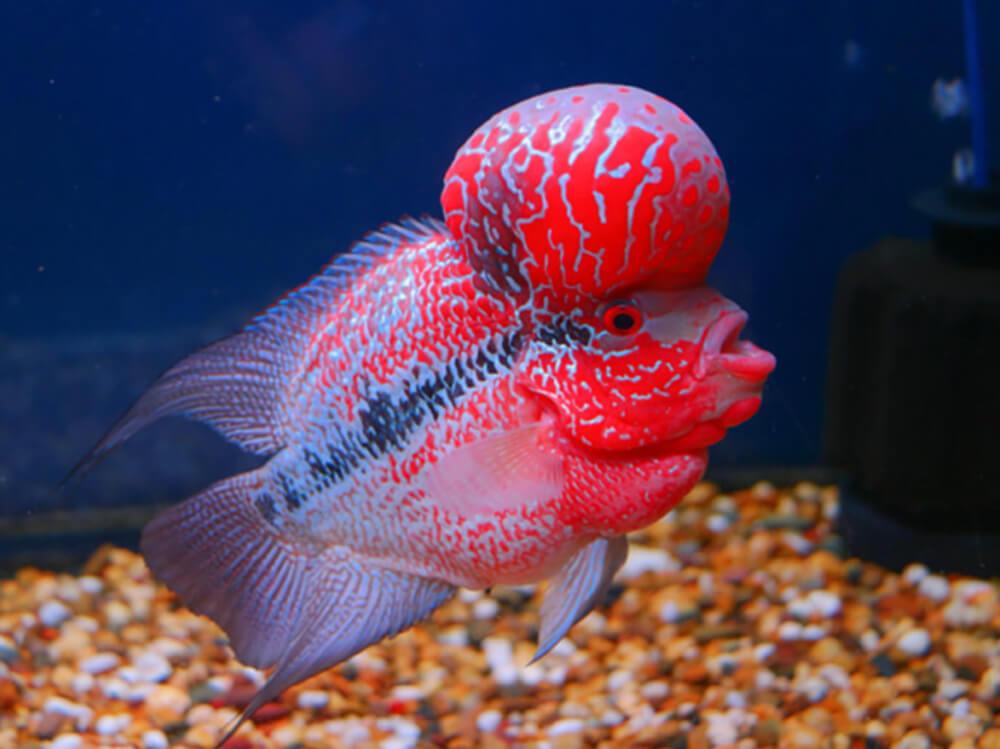 One or more of the original parent species was Amphilophus trimaculatus, and that’s the species that they most closely resemble, and behave like. They are tropical freshwater fish that originated in fish farms in South East Asia, and its in Asia that they are most popular.

They are so-called because of the “flower” marking and “horn” or hump on the head, though not all carry the markings anymore. There are lots of varieties including Super Red Dragon, Kamfa, King Kamfa, Thai Silk, Golden Monkey, Fader and others, and lots of different grades, body shapes and qualities. The fish with the best patterns and markings, and biggest head humps are highly prized and sell for large sums.

How big do Flowerhorn cichlids grow?

Male flowerhorn cichlids can and do grow to 12” in length and are big fish. Females are smaller. There are short body varieties called Balloon or Bonsai flowerhorns, and these grow to around 6” total length.

What tank set up do Flowerhorn cichlids need?

Standard body Flowerhorns need lots of space to grow so upwards of 4x2’ tanks are required, with five or six-foot tanks being better long term. For the Balloon and Bonsai Flowerhorns, tanks of 3’ and upwards are needed.

In South-East Asia they are often kept in totally bare tanks with just a filter, a light and an airstone. In the UK, you would need to add a heater to that equipment list too, and a colour enhancing aquarium light.

If you want to provide more environmental enrichment for your flowerhorn, set the tank up as you would do for other large central American cichlids, with gravel, rocks, bogwood and the odd plastic plant. Real plants will be dug up, shredded, and eaten.

Flowerhorn cichlids are large, messy eaters that produce a lot of waste. Use a large external filter to keep the tank clean and convert waste into less harmful substances. Air pumps are useful too.

What other aquarium fish can be kept with Flowerhorn cichlids?

Flowerhorns are very aggressive and territorial, so most are kept alone. That means one tank one fish, which is a big commitment long term. You could try a non-cichlid partner like a large suckermouth catfish, but have a divider ready for if the Flowerhorn attacks it.

Don’t combine with other cichlid species as it will attack and kill them, including its own kind. If you want a more accommodating brightly coloured hybrid cichlid go for a parrot cichlid instead, which can be mixed with most other fish.

How to make Flowerhorn heads bigger

The head hump, known scientifically as a nuchal hump, is common on Central American cichlids like Midas cichlids and the most mature, most testosterone-fuelled male fish grow the largest head humps. Your Flowerhorn head hump may grow larger as it matures but it may also be down to parenting and if the father fish had a large lump, or even hormone injection in the fish farms.

Some dry foods sold in Asia claim to increase the hump size although they are not proven, and not sold in the UK. Like with fancy goldfish, the fish with the biggest heads as juveniles are likely to grow even bigger heads as adults. Low-grade flowerhorns may have little to no head hump and may be cheap to buy as a result.

How to breed Flowerhorn cichlids

Flowerhorns are pair forming egg depositors, so a male and female should be introduced to each other, form a pair and then lay eggs on a hard, clean surface like a rock or a saucer. They will also protect and tend the eggs and fry.

The problem with trying to breed them is forming a pair in the first place as males will frequently beat up any females placed with them. The pairs may also be unstable, so a divider is necessary along with constant supervision if a male and female fish are introduced. Newly hatched fry can be fed on powered flake and newly hatched Artemia.

Unlike the Parrot cichlid, Flowerhorn fry are viable when bred with each other or even other cichlid species, and escaped Flowerhorns have made them an invasive species all over South East Asia.

What is the best food for Flowerhorn fish?

Flowerhorn cichlids should be fed a good quality cichlid pellet, along with occasional frozen and live foods. Large fish can also be fed Earthworms from the garden. Don’t buy Flowerhorn food from outside of the UK. It may not be legal over here.

Which Flowerhorn cichlid should I buy?

Buy the fish that most appeals to you, but if you want high-quality fish like the ones you see on Instagram be prepared to spend a few hundred pounds on one. Fish with very large head humps may develop buoyancy problems so make sure you see the fish and that’s it's swimming normally, and can hold a normal resting position in midwater.