How to get rid of green algae in a pond naturally

Categories: PondsAlgae and Pests
There are many chemical-free, natural ways to rid a pond of green algae, so we've put together a useful guide detailing these to make things easier for you. 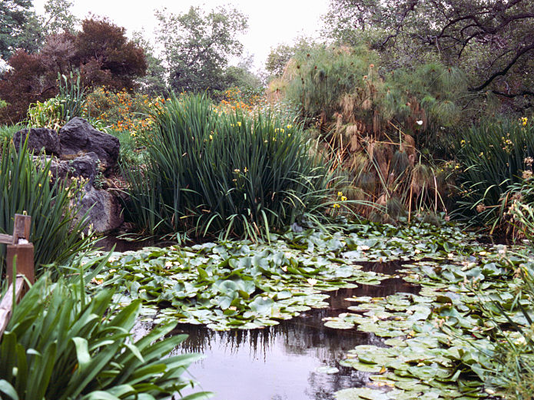 Those daylight hours are getting longer and longer as we go into spring/summer. The birds are singing, there’s blossom on the trees and the fish are active and hungry. Some are even spawning. But as idyllic as it all seems, the nation's ponds are about to enter the trouble time for green algae problems.

Green algae can be broken down into two main types - Greenwater, and Blanketweed. Greenwater is the term for when the water in the pond turns green, like pea soup, and you can’t see the fish anymore. Blanketweed is the name for the long, green, filamentous algae which attaches to the sides of the pond and can eventually spread across the water like thick, green spiderwebs.

Both types can be problematic for fish as really green water in strong sunlight can cause oxygen bubbles, or embolisms, to form on the fish’s fins, and severe blanketweed can trap, strangle and suffocate fish.

The main cause of both afflictions is a combination of light and nutrients. All algae need light to survive and they feed on nutrients to fuel growth. In nature, nutrients are tightly cycled by plants and bacteria, so there isn’t usually any spare for prolific algae growth. In the garden pond, nutrients can be added via several means including from tapwater, fish food and garden soil, and if you don’t remove those nutrients by chemical means, or have enough plants to soak them all up, the opportunistic algae take advantage and proliferate.

The first option to combat bad algae is to do nothing! In theory, the spare nutrients will be used by the algae bloom, it will run out of food and then start to die off. Change water and you may bring in fresh nutrients which can once again fuel algae, but this tactic would only really be feasible on fishless, wildlife ponds, as fish will always need food adding and partial water changes.

Something that’s also growing in usage in wildlife ponds is rainwater. Fill the pond with rainwater and it shouldn’t have the same level of nitrates, phosphates, micro and macroelements that tapwater does. And if you initially filled with tapwater, you could pump some out and start to replace with rainwater instead, but its effectiveness will probably be quite mild.

Next are to fight algae with live plants. Plants and algae have been competing with each other since the dawn of time, and heavily planted ponds (especially in full sun,) rarely experience the severe algae problems suffered by bare, unplanted ponds.

Next, plants use all those nitrates, phosphates, macro and microelements as fertiliser (they actually need it,) so a pond that is high in organic pollutants can be purified by adding lots of plants, especially fast-growing ones. By removing nutrients from the water column, the algae will be starved of its food.

The third is by chemical warfare, as some plants release allelochemicals into the water to retard algae growth. It helps to prevent their own leaves from getting smothered in algae too. So plant the pond quite heavily initially with a combination of marginal, oxygenating and deep water plants to naturally purify the water, help to prevent algae, or if the pond is already full of algae, they will help to fight it off. Aim for a third of the surface of the pond to be covered by plants at all times. Once it gets to two thirds, trim it back.

With blanketweed, manual removal goes a long way to helping to naturally control it. Use a blanketweed brush to collect the blanketweed like candyfloss, and then compost it. If you are worried that little aquatic creatures are in it, leave it at the side of the pond and they will crawl back in. Remove as much blanketweed as you can, as often as you can, and that in itself is a form of nutrient export. The blanketweed soaks up nitrate and phosphate and by you physically removing it, you also remove the spare nutrients from the system. As long as you aren’t also adding them by other means like fish food and via tapwater, that is.

The use of bacterial pond products is also growing. Bacteria can be used to kick start new filters, convert ammonia and nitrite, and reduce sludge. Bacteria can also be used to help strip the water of nutrients which the algae would otherwise feed on, while at the same time using enzymes to attack and break down algae strands. It's certainly all-natural, and some Blanketweed treatments will also contain enzymes to naturally fight Blanketweed. Give it a try!

Barley straw is a natural way to fight algae. On contact with water, the straw starts to break down, and as it does so it releases peroxides into the water which combat algae. Available in mini bales, or as a concentrated extract of barley straw liquid, it's a natural way of chemically fighting algae. If you want more instant results, go for the liquid, as the straw can take time to work.

Nature has its own army of animal helpers to help consume algae too. Ramshorn snails, if used in high enough number, will continually graze fine algae growth from the sides of the pond and plant stems, and hopefully, help to prevent blanketweed from taking hold.

Daphnia, also known as water fleas, are tiny freshwater filter feeders, which will turn green pond water to crystal clear in no time. The only snag with them is they are natural fish food so will be eaten if added to a fish pond, and they’ll also be sucked into the filter with any ponds employing pond pumps, so one for fishless, unfiltered, wildlife ponds only. But then they are very effective on greenwater.

Swan mussels are freshwater mussels which are available for ponds. In nature they are excellent filter feeders, and their effects can be seen on many a YouTube video where they clear a muddy tank of water in hours. In our ponds however they do struggle to get the right foods, so are only really suitable for large wildlife ponds, with no other filtration, and a deep, muddy bottom for them burrow into.

Grass carp have been introduced to lakes for many years to control “weed.” We also introduce them to garden ponds to naturally control Blanketweed, but unfortunately, they aren’t very good at it, prefer to eat standard fish food, grow to three feet in length, and like to jump out. High numbers may be effective in large land-locked lakes but are best left out of average garden ponds.

In severe cases, many of the natural algae options listed above can be used in combination. So if you have heavy blanketweed growth, remove as much as you can, plant heavily, add bacteria and enzymes, and use an extract of Barley straw. The effects should become apparent in a few weeks. For greenwater, extra plants plus bacteria and enzymes should start to see it start to clear in a few weeks.

Note that all algae will be at its worst at the height of the summer solstice, with 18 hours of daylight and warm pond water. Algae is also most prevalent in new ponds, so let the plants get established, follow all of the above measures, and your pond should find its balance and start to control algae naturally, long term. Whatever you do, don’t empty the pond and start again without changing some of the above factors, as without removing the cause, algae will just return and proliferate just as it did before.