What are the most colourful tropical fish? 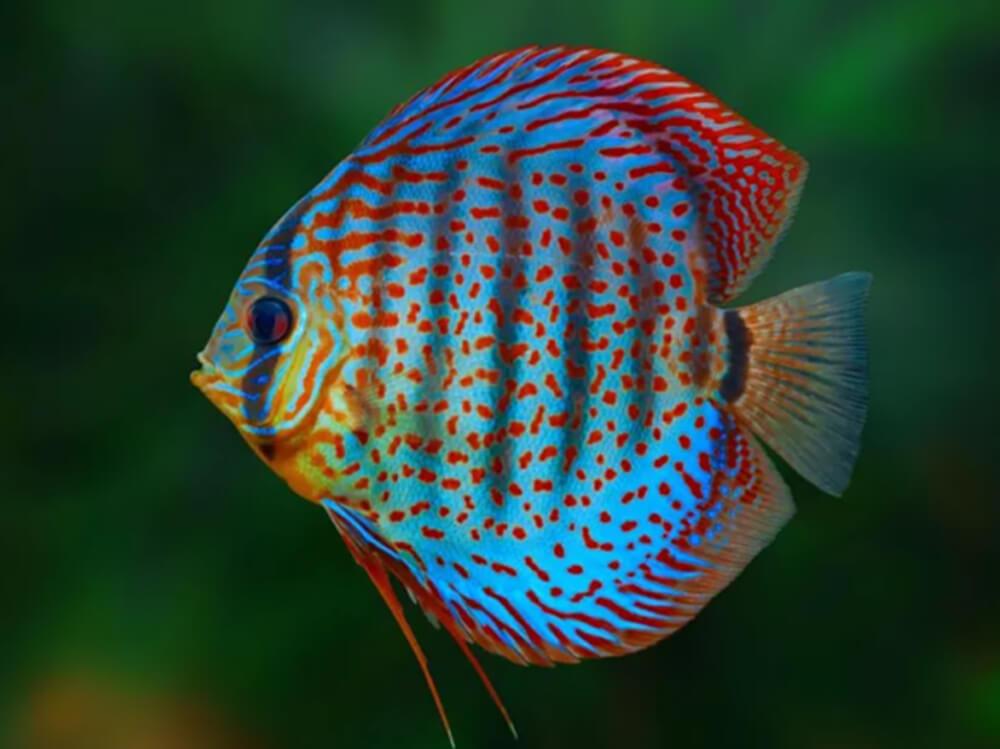 We are so lucky in fishkeeping that we have so much colour and variety in fish.

There are 32,000 fish species that we know of and they have every colour and pattern imaginable, to make them stand out to a mate or help them blend into their surroundings.

Us humans have created hundreds more colour strains of popular fish too like goldfish, guppies, Discus and angelfish so that now, no matter how large or small your aquarium, you can have all the colours of the rainbow represented in your fish and a truly spectacular, eye-catching aquarium.

In nature guppies are small fish inhabiting streams and ditches, males show flashes of colour but females are plain. But in the decades they’ve been in the aquarium hobby they’ve been line bred for colour and now you can buy bright blue, yellow, red, orange and snakeskin, even black.

Their cousins the Platies also offer huge amounts of colour to a tropical tank including red, yellow, bright orange, blue, gold and wagtail. If you’re missing a colour in your tank there’s usually a guppy or platy that can add it.

Probably the best known colourful tropical fish is the Neon tetra, with its bright red and electric blue colouration. Keep a shoal of neons and subdued lighting and it's almost like they produce a light source of their own. If you have soft, warm water and a mature tank try cardinal tetras, with even more red colour than the Neon. They grow slightly larger, are tightly schooling fish, and mature Cardinal tetras are surely some of the most colourful freshwater fish of all time. And totally peaceful.

Pearl gourami display rich red colouration under that lacey pattern and Blue gourami are available in a blue or a yellow form. But Dwarf gourami, with males naturally displaying red and blue vertical stripes, can now be bought in solid turquoise along with turquoise females when in nature the females are drab. Honey gourami too colour-up in nature with orange, yellow and black colouration, but if you want more instant colour, the Red Robin honey gourami is a solid red.

Angelfish are silver-bodied freshwater fish with black stripes in nature, but you can buy aquarium strains which are gold, silver, black and white and now even blue. Angels are specimen fish which suit large, tall tanks, so add a pair of marble angels for contrast, or if you want blue discus but don’t want the hassle, opt for blue angels instead.

Dare to do Discus

Discus are the kings of the aquarium, but linebreeding now produces Turquoise, Cobalt blue, Red, orange “pigeon blood” and snakeskin. Pick a colour, you’ve got it with Discus fish, and either stick to a group of identical individuals for a contemporary, classy look or combine all the colours and varieties for a riot of colour. They do need more care than average tropical fish, but succeed with them and even breed them, and you’re certainly doing something right.

Set up a tank for Malawi cichlids

The cichlids of Lake Malawi in Africa are nature’s little experiment at producing freshwater reef fish. They’re tropical freshwater fish but come from a lake that acts more like the sea with waves, deep, clear water, rocky cliffs and sandy beaches.

What the lake provides is variety, with every different coloured and patterned fish being its own species, but what it provides in terms of colour is bright yellow and bright blue, two colours which are rare in tropical fish in nature. Crowd them in a specially set up lake Malawi cichlid tank and people will think your fish are marine. Peacock cichlids, Aulonocara spp. are available in every colour from blue to red to yellow, spotted or even albino.

So-named because they display every colour of the rainbow, these freshwater fish from Australia and New Guinea look plain when in the shops but give them space, good water, good food and time, and they will blossom, becoming some of the most colourful naturally occurring tropical fish.

Blue rainbowfish and Red rainbowfish are exactly as the name suggests, while the Boesemani rainbowfish has a body that is half blue and yellow in maturity. If your tank is on the small size choose the Neon dwarf rainbowfish, which turns metallic blue with red fins, or if it's a nano try the tiny Pseudomugil gertrudae.

So many other species

Other unbelievable beauties include German Blue Rams, Redline torpedo barbs and Killifish. And if you’re a one tank one fish kinda person how about a Betta fish, available in red, blue, pink, purple, orange, even white. Feed colour enhancing food and use colour enhancing light to bring out the best colours in all your fish.