How to keep angelfish

Categories: AquariumsFish
Angelfish are some of the most popular tropical fish of all time and are widely available. They top the lists for many new fishkeepers. 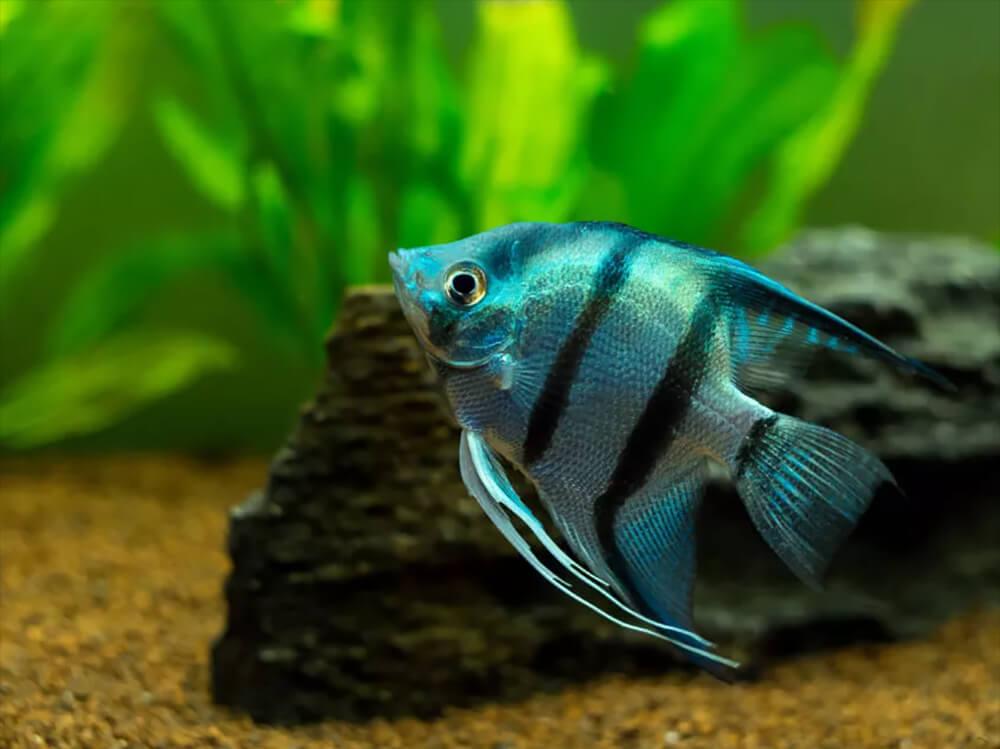 Angelfish are some of the most popular tropical fish of all time and are widely available. They top the lists for many new fishkeepers along with Guppies, Neon tetras and Clown loach, only there are a few things that every potential angelfish keeper needs to know before buying one.

Angelfish originate from the Amazon River basin in South America. There they inhabit deep, slow-moving rivers and lakes and share their habitat with tetras, catfish, and cichlids. Angelfish themselves are cichlids and they form pairs, lay eggs and then protect the eggs and fry from other fish that want to eat them. When they aren’t paired off they are shoaling fish and appreciate the company of their own kind, but when paired, they can be aggressive towards other angels in the same tank.

There are three species of freshwater angelfish, Pterophyllum scalare, altum, and leopoldi. Nearly all the Angelfish sold around the world are P.scalare, and that includes all the different colours like black marble, blue, golden, albino and veiltail.

Wild type P.scalare are also sometimes available with the classic silver body and black, vertical stripes, along with wild-caught angels which usually include the region they were caught in. Although originating from the soft, warm waters of the Amazon, tank bred angels are now hardy and readily acclimate to harder water. Adults often lay eggs too, although it’s not quite so easy to raise them to adulthood without setting up a separate breeding tank.

They are hardly ever bred in captivity and their expense, difficulty of keeping and breeding, size and beauty all add to the appeal for die-hard fishkeepers. Some P.scalare are sold as Altum angels to increase the price, but there is nothing quite like them.

Experts even collect fish from different locations and keep them separately to study them and keep their genes pure. Altums are only available in the wild form, with some people questioning the validity of tank bred fish. Because of their height, they need very tall tanks and do best in groups of ten or more, all adding to the exclusivity of this fish.

The third angelfish species is a dwarf compared to Altums and usually smaller than scalare. Leopoldi angels, also known by their old name of dumerilii are usually only available wild-caught and only in the wild form, but unlike Altums they are straightforward to keep and modestly priced.

Leopoldi angels have shorter fins than the other two species, and this along with their smaller size snakes them suitable for slightly smaller, slightly shallower tanks. All three angelfish species could be kept together in very large aquaria, although the water parameters and temperature would have to suit the Altums first and foremost, and most Altum keepers wouldn’t risk spreading disease to their highly prized fish.

There are many species of Angelfish in the tropical oceans, but they are angels in name only, and are not related to the three freshwater species.

Standard angelfish grow to 3” body length and 6” high, so need a large aquarium with a minimum size of 180 litres. In a tank of that size four or five juveniles can be added, but as they grow older, if a pair forms, the other angelfish may have to be removed. In fact, angelfish can be far from Angelic when adult, and they are known for eating small fish, especially Neon tetras.

Don’t add small Neons to a tank containing adult angels as they are likely to snack on them as soon as they are introduced. And don’t add angels to any tank with fin nipping fish like Tiger barbs, as those long trailing fins are too tempting for any species that like to nip.

Aim for a pH around 7, although anything from 6-8 is fine, and a temperature of 24-28C. Water quality should be managed by a good, mature filter, but they don’t appreciate strong water flow. Decorate the tank with tall, upright pieces of wood, and tall plants.

Larger tetras like Bleeding heart and Black phantom make good tank mates, along with Corydoras and Whiptail catfish. Angels shouldn’t be added to any aquarium under six weeks old as they aren’t tolerant of water quality blips, yet require frequent feeding and grow quickly.

Some people state that they can reliably sex angelfish while other expert breeders say that you can’t. Very mature males may develop a nuchal hump, but the only reliable way is to compare the difference in vents when a pair actually spawns. They typically lay eggs on a vertical surface and guard them against all comers.

It’s not unusual for eggs to turn white and not hatch, especially with new parents, and generations of line breeding haven’t made all the angels the excellent parents that they should be. Once a pair forms they will likely lay eggs frequently, so are best moved to a breeding tank on their own as they will ruin the peace of the community tank. Angelfish fry can be fed baby brineshrimp and dry powdered food aimed especially at young fry.