How does an aquarium sump work?

Categories: AquariumsEquipment
Sumps can be used on any aquarium but are most popular with marine keepers. In essence, a sump is another aquarium attached to the main one. 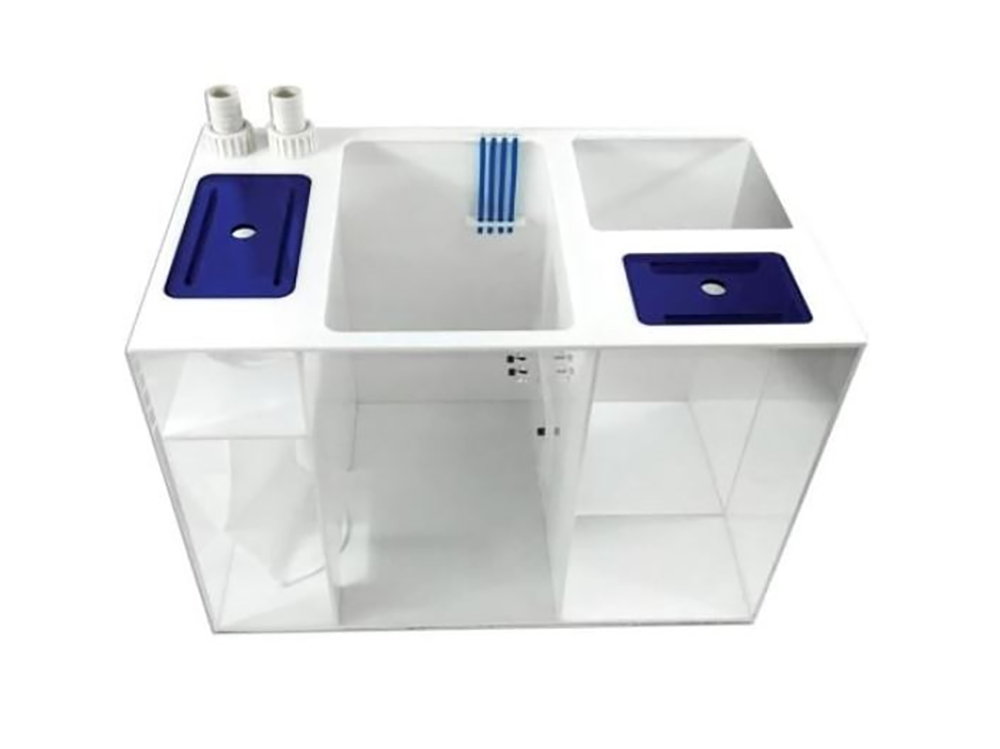 Sumps tanks can be used on any aquarium but are most popular with marine keepers.

In essence, a sump is another aquarium attached to the main one. They are usually placed in the cabinet underneath but can even be placed above a tank and run “upstream.” Multiple tanks can be attached to one centralized sump, and that method is popular with local fish stores for keeping lots of fish in lots of tanks but only have to water change the sump to water change them all.

How does an aquarium sump work?

To connect a sump to your main tank it will need to be drilled, or have an overflow box fitted. Sumps work via gravity so water is pumped into the main display tank from the sump via a return pipe and aquarium sump pump. Water circulates around the tank and fills it to the point where it overflows down a drainpipe, and back to the sump.

The position of the hole, weir, or overflow box in the main tank sets the water height and water will then always be at that level regardless of if you remove some during a water change or it’s lost through evaporation.

Once back in the sump dirty tank water can be filtered. Sumps are usually divided up using baffle plates and the first section is usually where mechanical filtration takes place. Filter wool, sponges, filter socks or a roller filter can all be used to trap physical waste and to clear the water.

If its a saltwater aquarium the next section usually houses a protein skimmer, then biological filtration, but for a freshwater tank, a protein skimmer is not used. After flowing through the mechanical and biological media water can be heated and returned to the main tank by the pump in the last chamber.

Some reef tanks come with sumps as they are generally accepted as the most useful way to filter a reef. All the equipment can be hidden away down there, is easy to access, while not cluttering up the main display tank.

How to deal with aquarium evaporation

The most common concern with new sump users is that the pump in the sump keeps blowing bubbles. This is because water has evaporated from both the sump and the main tank and the pump chamber is running dry. All sumps for tropical marine or tropical freshwater tanks will need an auto top up device fitted, to compensate for water lost through evaporation.

What size aquarium sump do I need?

System volume recommendations are usually made by the manufacturer, although you can also calculate the minimum sump size you will need at home. When the power goes off a certain amount of water from the main tank syphons back down the return pipe into the sump. Weirs may also drain, releasing their water volume into the sump below.

A sump must be large enough to house all its own water plus about a 5cm water level reduction coming back down from the main tank. That’s why sumps are usually only half full. It’s to be able to deal with water back-siphoning from the main tank when the power goes off. If in doubt go for the largest sump that you can physically fit in the cabinet.

What is a refugium?

A refugium is an area of a reef tank sump where macroalgae and/or tiny marine creatures can take refuge from being eaten by the fish in the main tank above. An algae refugium uses macroalgae to reduce nitrate and phosphate as it uses it as fertiliser.

Place a bright light in the sump and the macroalgae will grow, lock up nutrients, and then you harvest a portion, and nutrients are removed at the same time. Tiny critters like copepods can feed and breed in a refugium and as their numbers grow, a proportion will overflow into the pump chamber and be pumped into the main tank as natural fish food.