Why does my fish tank smell?

Categories: AquariumsWater Quality
No one likes a stinky aquarium and for some, it can make them feel positively sick! Here are some of the causes and how to fix them. 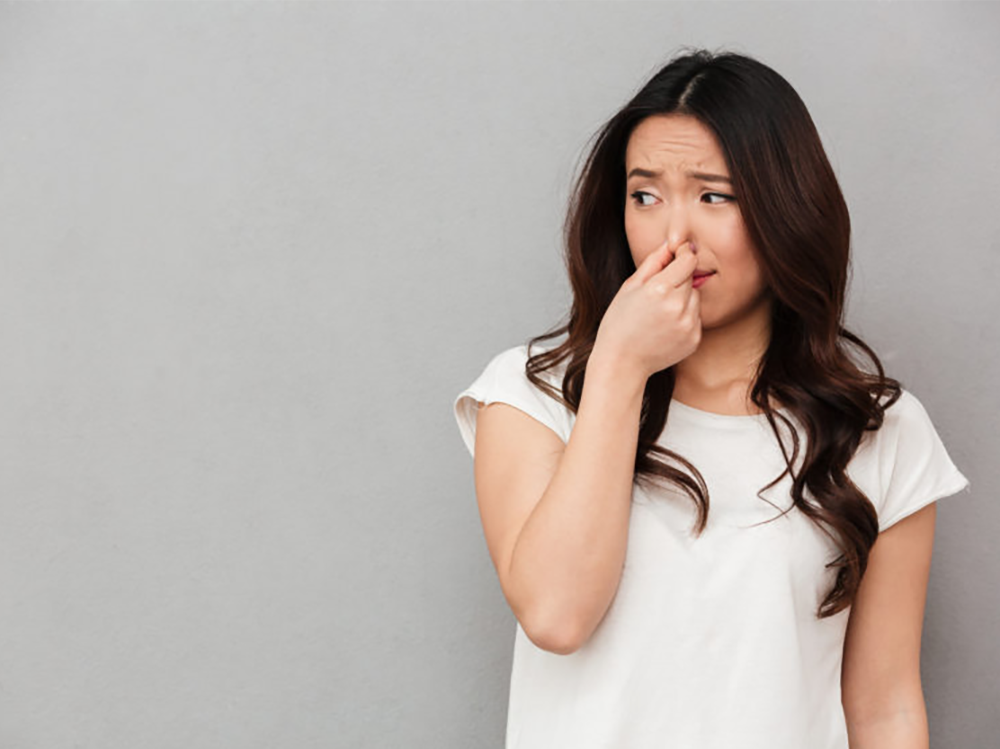 No one likes a stinky aquarium and for some, it can make them feel positively sick! Here are some of the causes and how to fix them.

Once you know what ammonia smells like, you’ll recognise it for the rest of your life. It smells like pee-filled babies’ nappies, which is ironic because it’s widely used in household cleaning products.

If you smell ammonia coming from your fish tank something is seriously wrong. The tank may have been stocked too quickly, the tank could be overstocked, overfed, under filtered or a fish may have died in there. Test for ammonia to make sure, and if it is present at any level above 0.00, conduct a large water change, add an ammonia detoxifier, some live beneficial bacteria, and stop feeding. Check the whole aquarium for missing fish or dead fish.

If you’ve ever been coarse fishing, mucus smells like your hands and landing net smell after landing a large carp. Most common in goldfish tanks (also a type of carp,) extra mucus might be produced by the fish if water quality is poor (see ammonia,) or if the fish have parasites irritating their skin. A visual mucus indicator can also be slimy bubbles on the surface. Bubbles pop cleanly in mucus-free water but become foamy and linger when mucus is in the water. Test, conduct a large water change and consider a larger tank or less fish long term.

Goldfish bowls often used to smell of uneaten food, and fungused, rotten excess food on the bottom of the tank produce a mouldy, stale smell. Remove any leftover food with a net or syphon it out with a gravel vacuum. Feed less, and consider changing foods if you’re fish simply don’t like it.

Bogwood can give an earthy smell to the water, especially if part of it is sticking out of the surface. Being neither live nor fossilised, wood will continue to break down in warm, bacteria-rich water, disintegrating entirely after ten years or more. New wood and different types of aquatic wood may also develop fungus, and all woods will release tannins, giving a barrel-like odour, and staining the water the colour of tea.

Water changes and activated carbon are the order of the day as carbon removes both stains and odours. This is one smell that’s worth putting up with as many fish inhabit tannin-stained “black water” in the wild, including popular species like Cardinal tetras and Pearl gourami. Blackwater can condition soft water fish, makes it difficult for algae to grow and can improve fish colouration.

Anaerobic bacteria exist in areas of low or no oxygen and produce a smell of rotten eggs. Fine substrates can go anaerobic if not turned over regularly, as can resin ornaments if food becomes trapped inside or under them. The remedy for anaerobic substrate fish tank smells is to clean it with a gravel vacuum and thin it out long term.

Substrate sifting fish can help keep aquarium sand clean, and ornaments can be lifted and shaken periodically to remove any built-up debris. Quarantine, hospital and some aquatic store tanks do away with substrate entirely, better for dealing with parasites while also removing anaerobic substrates from the equation entirely.

Use carbon to remove a bad smell

Carbon is an adsorptive chemical media. Adsorption is a process where a solid is used for removing a soluble substance from the water. Carbon is by far the most popular and effective way to keep your aquarium smelling fresh. Activated carbon has a higher surface area than normal carbon so can adsorb smells even more effectively. Carbon can be effective on all of the above smells and will also provide crystal clear water. Replace all carbon on a monthly basis.