Why did my pond fish die?

Categories: PondsFish
If you find a dead fish in the pond the first thing to check for is oxygen, which you do visually. Then, check your equipment, and of course, test your water. 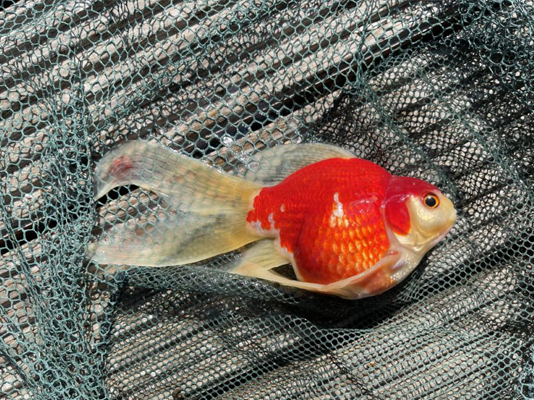 If you find a dead fish in the pond the first thing to check for is oxygen, which you do visually. Is the pump/filter running? Is the water being agitated via a waterfall or fountainhead? Are the remaining fish hanging at the surface gasping, or are they ok?

Warm muggy nights and well-planted ponds can deplete oxygen levels and the largest fish will be first to succumb. Golden orfe are particularly susceptible to low oxygen levels so if the dead fish was your largest and an orfe, it was probably oxygen. Oxygen test kits are available, so test oxygen levels at night and in the daytime, to see if the levels alter. If oxygen levels are going dangerously low, use an air pump and airstone (especially at night,) to improve gaseous exchange, and to oxygenate the water.

The second thing to check after the oxygen level is water quality. Poor water quality is the biggest killer of fish in both ponds and aquariums so buy a master test kit and test for pH, ammonia, nitrite and nitrate. pH should be 7-8 so if the pH is very high (9 or above,) that can kill fish and make ammonia more toxic. It’s also an indicator that the water is in contact with some concrete somewhere which is leaching lime and raising pH to dangerous levels.  If pH is very high conduct a large water change and find the source of pH contamination.

Ammonia and nitrite are very toxic to fish and both must read zero on a test kit at all times. Even if there are low, underlying levels of ammonia at less than 1ppm, that’s enough to stress and kill pond fish.

The presence of ammonia and nitrite will indicate several things:

All of the above can be fixed by ensuring you have a filter on the pond and it’s large enough to cope mechanically and biologically with all your fish and their potential maximum size in the pond. Also that the filter is working biologically and is converting ammonia by way of the beneficial filter bacteria living within the filter media. The fish are not being overfed, the uneaten food is being removed, and there are no dead fish, causing the resultant death of others through high ammonia levels.

If ammonia or nitrite is present you must also act fast to avoid harming the other fish in the pond. Conduct a large water change with dechlorinated tap water. Stop feeding. Add beneficial filter bacteria.

The next biggest killer of pond fish is from disease. Pond fish can die from a whole host of viral, bacterial and parasitic diseases, none of which can be seen with the naked eye. Have a look at the other fish in the pond as a fish disease is rarely isolated to one individual. Are the other fish active, with spread fins, and feeding? Or are they looking lethargic, with clamped fins, and hanging in the water? If it's the latter disease may be what killed your fish and the remaining fish will need treating with a pond medication.

If you are not sure what disease your fish may have, treat the pond with general disease treatment. If they have obvious disease symptoms like Whitespot or Fungus, treat with a medication aimed at exactly that. The best possible way to diagnose fish disease is to get an expert to take a skin scrape. They will then be able to identify the parasite and you can then treat accordingly. Accurately work out the volume of your pond, turn off the UV if required to do so and use the full duration of treatment as directed by the medicine manufacturer.

Inspect the dead fish. Does it have any marks on it like it’s been attacked? Many animals can attack and kill pond fish including cats, otters, mink, herons and crows. Did the predator pull the fish from the water then hurry off and leave it behind to die? Or was the fish stabbed or slashed by a beak, teeth or claws and then died from its injuries? Any marks on the fish may indicate an attack.

If you find the fish on the side of the pond, dead, but unmarked, it may just have jumped out. First, check that it is actually dead and cannot be revived by placing it back in the water as you’ll be surprised. Sometimes even a fish that is dry and quite stiff can come back to life if placed in well-oxygenated water to recover.

If it is dead then the cause of the jump may be several things from being startled to being irritated by a parasite, to low oxygen levels, being chased or just being newly introduced. New fish are most likely to jump out on the day or night they were placed in the pond, so always cover the pond on the night after you introduce new fish.

And some fish are just natural jumpers like Grass carp, Golden orfe and Rainbow trout. Orfe and trout will both jump towards water outlets from filters or watercourses and inevitably end up high and dry. Again, covering the pond with a pond cover net is the only way to prevent this.

The act of reproduction can also be too much for some fish. Male goldfish relentlessly pursue females for days when trying to get them to release eggs, and this can tire and even kill fish sometimes. When they spawn, goldfish also force females into the shallows so it’s not unknown to find males and females stranded after swimming too far into the shallows to spawn.

Female goldfish can also get secondary infections days or weeks after spawning. The skin on their flanks thins and this can be rubbed against rough surfaces when spawning, causing fungus growth days after. So if it’s a dead fish with white, cotton wool-like growth on its side, it may be a female fish which spawned and then died from secondary infection.

It is, of course, possible that your pond fish has died from old age, although expect koi and goldfish to live for twenty years or more in an outside pond. Most fish are only in their first or second year when you buy them so if they die within a couple of years it's highly unlikely to be from old age.

There are other stressors that can cause death, however, and lower lifespan. Extreme cold weather can affect fish and it's normal to lose one or two fish in the harshest winter conditions. Extreme heat will increase a fish’s metabolism and ultimately shorten its lifespan. Pond fish that spend their lives in heated water often live for less than those that receive a colder, dormant period.

Poor quality fish food can lead to premature death as all the nutritional requirements of the fish may not have been met, and a fish that is fed constantly for maximum growth may grow huge in a short time but die young. A fish that is fed poor quality food, exposed to poor water quality, gets a disease and is kept in an overcrowded pond will also be expected to live a shorter life than a well-fed fish in a well filtered, spacious pond, with good water quality and no disease.