How to keep seahorses

Categories: AquariumsReefkeepingFish
Seahorses are some of the most recognizable marine fish, and everyone wants to keep them. They look very un-fishlike and cute, but they have their challenges. 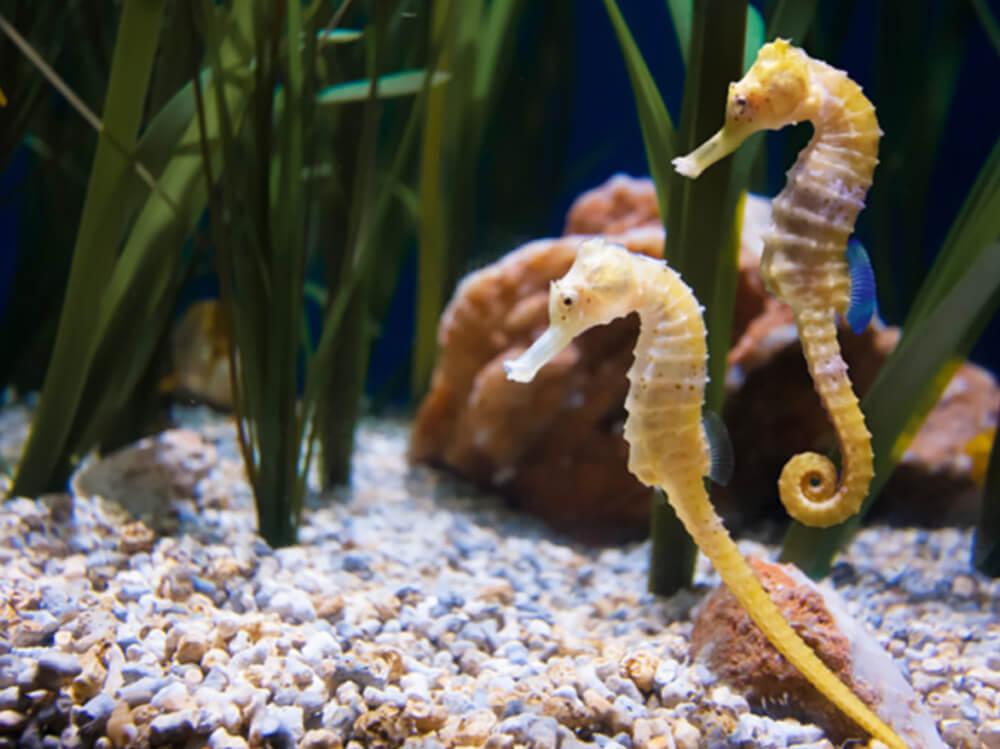 Seahorses are some of the most universally recognizable marine fish, and everyone wants to keep them.

They look very un-fishlike and cute, but they have their challenges and aren’t for beginners. They aren’t even suitable for established reef aquariums. Here’s why:

Slow the flow for seahorses

Reef tanks have powerful currents produced by wave-making pumps. That’s great for a strong swimmer like a Yellow Tang or a wrasse, but Seahorses will be blown around the tank and won’t be able to swim against it.

They can hang on to things with their prehensile tails and do experience wave action in the wild, but it tends to be a back and forth motion, not a strong surge, and they mostly hang on to seaweed or seagrass, not noxious corals. Worse case is that they will try to hang on to the cage on the wavemaker, meaning potential disaster. And they won’t chase their food so risk starvation.

So the seahorse tank should have little flow, and the flow from your return pump will be ample. You won’t need a wave-making pump, saving you money, but if you want to run one set it on a fast pulse but a low output, to try and generate small, short waves or pulsing ripples.

Many public aquariums breed seahorses and some just use small, air-powered foam filters. If your tank is sumped a small internal filter may be all they need, but it must be very mature to avoid water quality problems.

How to choose the right seahorse sized tank

A simple Juwel aquarium converted to marine can work just as well for seahorses as a dedicated reef configured tank, as the relatively gentle flow from the filter but large filtration capacity can work well for them.

Consider saltwater ready systems from Red Sea, D-D, Evolution Aqua and Aquarium Systems, but pair them with small to moderately sized return pumps adjusted down to turn the total tank volume over five times per hour.

Just like any other marine fish, Seahorses need mature water that is free of ammonia or nitrite, low in nitrate and low in phosphate. This can be achieved in a number of ways using either sponges, filter floss, filter socks or a Clarisea. For biological filtration ceramics or sponge can be used, along with some carbon and phosphate remover.

Protein skimmers will aid water quality in the seahorse tank by removing some of that liquid waste before it is broken down by filtration. They can work alongside standard filters and are available to hang on or sit inside tanks which don’t have sumps.

Add a refugium to your seahorse tank

A refugium is a filtration space away from the main tank where fish can’t get to. Its name comes from providing a refuge for tiny critters like amphipods, copepods and mysid shrimp which would be eaten by the fish in the main tank.

Here they can get to work munching on detritus and if their population explodes and some overflow into the main tank as food, its a bonus. Algae refugiums harbour macroalgae like Caulerpa and Chaetomorpha which can provide cover for the microfauna as well as themselves soaking up nitrates and phosphates and using them as food.

Refugia can benefit seahorse aquariums in several ways by helping to filter the water and providing a natural source of live food. If you ever have a Seahorse which looks thin, a week spent inside an algae refugium full of live mysis and copepods may actually do it good.

Most of the seahorses we keep are not the ones we see in photos, hanging onto gorgonians. Instead they hang on to Seagrass, Seaweed, even discarded rope and fishermen’s nets, and they spend more time attached to a holdfast than anything else. They need lots of adequate places to hang onto and will become stressed if they can’t.

Corals don’t make suitable places to hold onto, and the coral won’t appreciate it either. In the dedicated seahorse aquarium, grow lots of Caulerpa in the main tank or decorate with artificial aquarium plants or even coarse netting.

Plastic chains are popular with Seahorse keepers because they float upwards from the bottom and Seahorses seem to really like them. Don’t let purist views on decor get in the way of the best welfare for your seahorses. A plastic plant can make a very suitable place to hold on to. Better still is a holdfast where they can hold but feed at the same time. Give it a try.

Tankmates are probably the number one killer of seahorses, not always directly, but through competition. Experienced seahorse keepers will know that they can be frustrating to feed at times. Sometimes they will let food float straight past their snouts, while other times they may take minutes to go over to the food and look at it before deciding to suck it up and eat it.

In any standard reef tank, this feeding strategy doesn’t work as every fish will get to the food and eat it before the seahorse does. Couple that with strong currents that the seahorse can’t actually swim against, and you get starvation and death. The impact is twofold when keeping them with other fish as there aren’t any reserve populations of copepods in the rocks either, as they’ve been found and snacked on to.

So seahorses must be kept alone, with other seahorses or with their relatives the pipefish. Another species which is known to be outcompeted and starve in normal aquaria is the Mandarin, Synchiropus splendidus.

Mandarins can be a fitting partnership as both can be closely monitored and target-fed, and if you develop an Aiptasia problem, common in heavily fed Seahorse aquaria, if the tank is large enough, it can make good habitat for a Copperband butterflyfish - another fish prone to starvation in conventional reef tanks.

But leave all others out. A seahorse tank really should be set up and run especially for their needs. If you are desperate for a reef tank and seahorses, two tanks are the only way forward.

Feed the right food for seahorses

The best food for seahorses is frozen Mysis shrimp, fed several times throughout the day. Look for a quality mysis known for its high protein content as all frozen Mysis is not the same. Sprays and dips are available to further enrich it. It will be tempting to feed your seahorses on frozen Artemia or Brineshrimp, although the protein level is low and it will be difficult to keep weight on them.

Live foods can equally problematic as they must be fed straight from the hatchery. Every hour they go with food, live food depletes in its energy values, so live food which is days old in the bag may be accepted by the seahorses but may not offer them the nutrition that they need.

Seahorses need to feed almost constantly and in the wild are often surrounded by clouds of live mysis shrimp. If they go too long between feeds or have to expend too much energy swimming to and hunting for food, they can lose weight and slowly starve over the coming weeks.

How to breed seahorses

If you can maintain a population of adult seahorses and have males and females of the same species, they will breed. Males have the famous pouch on their bellies that they raise the fry in, and with females, it’s absent.

Breeding actually happens surprisingly frequently and you may even witness the male “giving birth” as he pumps his pouch and ejects the tiny fry into the main tank. Feeding baby seahorses is difficult, however, and usually the domain of public aquaria who can raise copepods and the necessary Phytoplankton cultures to feed the pods, to feed the fry. There are a plethora of liquid foods available now however, so successful seahorse breeding at home may be possible.