Categories: PondsFish Health
It’s worth knowing which diseases make your fish sick, and it’s important to be able to identify them to ensure they don’t run riot and cause any serious devastation. 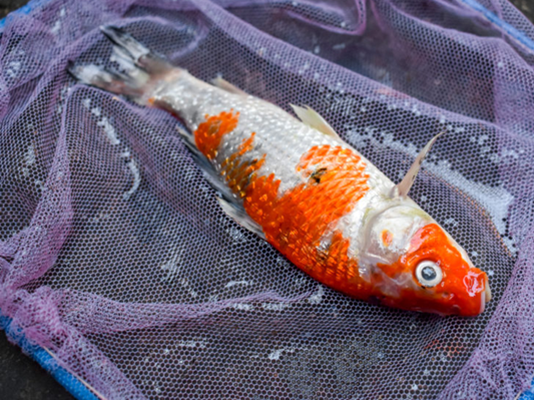 It’s worth knowing which pond fish diseases make your fish sick, and it’s important to be able to identify them to ensure they don’t run riot and cause any serious devastation in your system.

Ulcers are usually very obvious, and are first noticeable as an open wound, often pink, with red and white edges. This is caused by bacterial infection which gets in from any wound, which could be a simple graze or come from the wound site from a parasite. Fish that are under particular stress, even just from poor water quality, can get ulcers due to their immune system being suppressed. It’s important to remember that treating the ulcer on its own is often not enough, as the initial cause, either a parasite or stress, will need rectifying to ensure there are not future problems just reoccurring.

Ulcers can be fairly superficial, just across the scales, but can occasionally become a lot more serious infectious diseases, penetrating into the muscle or even down to the organs if untreated. This wound itself will be sore, and the surrounding area will often be swollen, and if untreated the bacteria will continue to infect the fish.

The best treatment for sick fish with Ulcers is a general formula, such as Blagdon Anti-Ulcer, which is designed to treat the bacterial infection and help the wounds to heal as well, making recovery quicker. Another option, though not for the beginner, is the use of a direct treatment onto the actual ulcer itself, such as the NT Labs Ulcer-Swab, which is designed to be put directly onto the wound, helping it start effectively treat the fish disease much quicker.

Remember to check your pond water quality and ensure that there are no lingering problems with the water that could cause this problem to keep repeating. Check regularly for other potentially factors too, such as parasites.

Fungus is one of those horrible white fluffy looking fish diseases, which tends to grow on fish that are stressed and have a low immune system, often from poor water quality. It often resembles cotton wool and tends to grow in a certain area of the fish.

Fungus spores will take advantage of any weakness within the fish, and will not affect a fully healthy fish, as the protective mucus layer across the scales protects them. Whenever this mucus layer is damaged though, through damage such as a scratch, or through a parasite or similar breaking the layer, or even just from poor water quality meaning the layer isn’t maintained properly, then the fungal infections can get in and take hold.

Its vital to ensure you treat any fungus outbreak straight away, as it will spread rapidly, usually as whatever has made one fish week will have an impact on all of them, so the fungus can easily spread across the system.

Treatment is best done with a liquid treatment. If you have more basic, stronger fish then NT Labs Malachite is ideal, although if there are any sensitive species, such as Sturgeon or Orfe, then a more delicate treatment, like Eradick Anti-Parasite and Fungus, would be better. Pond salt can help too.

Sometimes known as Bloat, dropsy is very easily identified, as the fish is very visibly bloated, sometimes swollen to the point of the scales sticking out, looking like a pine cone. This is caused by a bacteria that sneaks in when a fish has a weaken immune system, whatever the reason is for it. As with many other infections, chances are that if one fish in the system has a weak immune system, chances are that most of them do, so again, dropsy can spread quickly.

As the bacteria takes hold of the fish, it causes a build-up of fluid in the belly of the fish, which swells, and often leads to damage to the fishes organs, which would ultimately cause death. Treatment straight away can prevent it getting that far, though by the time its noticed, some damage is often already done.

Treatment isn’t hard, though is often too late. One of the best available treatments is Waterlife Octozin, though fish will often need to be quarantined to treat effectively, and will only be effective when caught early enough. Once the disease has reached a certain stage there is too much damage done to the body and there is very little chance of recovery from this, so euthanasia is sometimes required.

Fin Rot is often grouped together with Fungus, but is in fact caused from a bacteria infection, attacking weak fish and taking advantage of a low immune system. It usually shows up as white edges on the fins, and jagged edges where the fins are breaking down. Sometimes aggression between fish can be initially diagnosed as Fin Rot, but doesn’t have the other symptoms such as the milky white edges.

If left untreated the fin rot can start to move further into the fish and cause more problems, especially as other infections can get into the wounds created. Eventually the entire fin is eaten away, leaving just the rays of the fins without any of the membrane across them.

As with many other diseases seen here, it’s vital to ensure you treat the underlying cause of the problem, that may have caused the fish stress in the first place, and then treat as quickly as possible to prevent continued damage. NT Labs Bacterad is a great single dose treatment that will help to control the bacteria and treat the fish, and is suitable for all fish species, even more sensitive ones like Tench.

Carp Pox, or Fish Pox, is a form of the herpesvirus, and can affect many fish species, not just Carp. It is usually first seen by lesions over the scales or fins, often a milky colour that are visible but smooth. When fish have an intense infection, it can cause disfiguration across the scales, and as with most diseases, will usually allow secondary infections to get in and cause further problems.

Unfortunately there is no treatment for Carp Pox, though it is not fatal. Some fish can live with this without any other major health issues, and some fish can carry the virus without any of the visible symptoms. Problems often occur mainly from the secondary infections, or from mis-diagnoses and incorrect treatment being given. In reality, ensure they system is as healthy as can be, and that nothing can stress the fish further and cause any problems for the immune system, ensuring your fish has the best chance of fighting this themselves.

As mentioned, the most important thing with any fish disease is to ensure that you discover the initial cause, as it is likely that stress, poor pond water or other health issues have caused the problem in the first place, so any treatment may help, but the same problems with reoccur. Treating the cause, by ensuring the water quality is the best it can be, will mean that the fish are better equipped themselves to try and fight the infection, and that any treatment you then use has a real chance of working. Checking your water regularly, keeping on top of maintenance and checking fish regularly will all help to reduce the chances of any real diseases taking hold in your system. Cold water temperatures can also cause it.