Parasites in your Pond 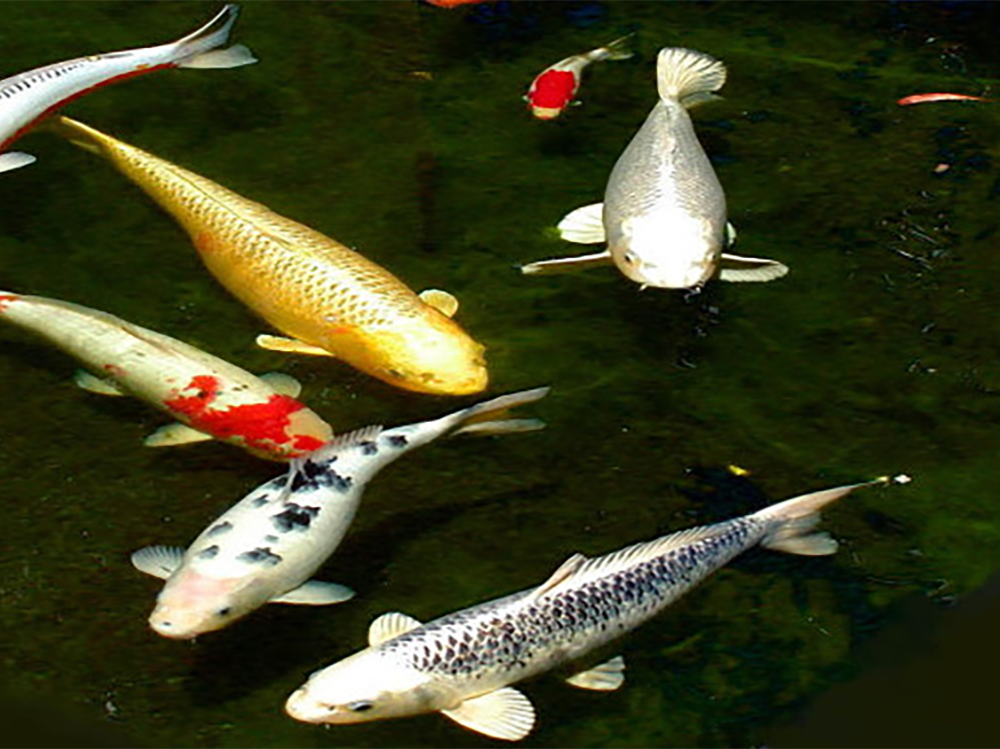 Parasites in your pond can be a major cause of concern. They can quickly spread and cause devastation to your system. Recognising the signs and symptoms can save a lot of disruption and heartache. We’ve put together a group of common pond parasites to watch out for. Next week, check back for other common health issues for fish in ponds, followed by health concerns for aquariums too.

The most common parasite in fish is White Spot, the dreaded Ich, which will quickly cover a fish and then start to take over the entire pond if left to its own devices. All aquarists have seen this covering fish, though the visible white spots are the parasite already maturing in its life cycle. You may notice flashing firstly, fish rubbing against objects, to soothe their scales, and then start to notice the salt-like spots across the fish. Some fish may be lethargic and have clamped fins close to their body.

There are a host of treatments available for White Spot, though it can be difficult to eradicate due to treatments only being effective against the parasite whilst free swimming – so once the white spot has actually popped and released the next life cycle into the water. The parasite you can visibly see on the fish will not be affected by the treatment, so treatment tends to take around 2 weeks, which is the length of the life cycle of the parasite. Treatments will often recommend repeat doses across a weekly period, in order to capture the newly hatched parasite and prevent them from re-infecting fish. Many treatments will recommend to continue treatment for 1 week after the spots have gone, to ensure no more jumps back on to the fish.

The most effective treatments tend to be Malachite or Green Formaldehyde. For the best results, NT Labs F-M-G is a combination of both treatments, but due to its strength is not recommended for sensitive fish, such as Sterlet, Tench, Rudd or Orfe. More suitable treatment for sturgeon and other sensitive species would be the NT Labs Malachite on its own.

The thing to bear in mind with White Spot in ponds in that sometimes breeding season can cause a little confusion. Male goldfish will often get Spawning Spots, known as Breeding Tubercles, around their gills and head when ready to mate. These small white spots look very similar to the White Spot parasite, but won’t cover the whole body, and the lethargy and clamping won’t be seen, so be sure to thoroughly check before jumping to conclusions!

Flukes are very strange little parasites, of varying shapes and sizes. Flukes are trematodes, a species of parasitic flatworm. There are various species that could affect pond fish, the most common being the skin fluke or the gill fluke. They vary from small and circular (mainly skin flukes) through to the long and thin (normally gill flukes), and attach themselves to the skin and hooks in, which is what tends to cause the most damage to the fish, and invites infection. The skin fluke (Gyrodactylus) is hermaphroditic, and so one can quickly escalate, with the potential of one fluke establishing a colony of 2000 within 30 days oh hosting when the conditions are ideal. The gill fluke (Dactylogyrus) is less prolific as it’s an egg-laying parasite, however can quickly dominate a pond.

Similar to White Spot, fish with flukes often rub and flashing against objects, and will usually be seen with clamped fins near the bottom of the pond. Skin flukes are usually visible if you’re looking thoroughly, and are seen from slightly raised opaque patches, sometimes on the fins. There may be excess mucus being secreted by the fish and so larger patches look cloudy.

Treatment of flukes will depend on the severity of the infection. A single fish could be successfully treated with a salt water dip, though this will only soothe the fish and remove the current parasites on the fish, and won’t treat the further generations just bred in the pond itself. NT Labs Formaldehyde is a particularly good treatment, though is very strong and shouldn’t be used with more sensitive fish species, as listed above. A more generalised treatment such as Anti-Parasite would be better if you have Orfe, Tench, Rudd or similar. Acriflavin can be particularly helpful for fish that have had flukes, as there is more chance that bacteria will get in and develop into a further infection. The Acriflavin will help to soothe the skin with its mild antiseptic and reduce the chance of any infection.

Anchor worm, or Lernaea, is usually clearly visible, and can grow around a 1-2cm, and will be seen sticking out from under the scale of a fish. The main head of the parasite is burrowed into the skin, and the remaining body hangs out. Like flukes, secondary infections are the main point of concern with Anchor Worms, as nasty wounds are often seen from their “anchoring” technique.

Infected fish with Anchor Worm should ideally be quarantined to ensure that the parasite doesn’t continue to release eggs that will affect the rest of the fish. Unfortunately to treat this, the only solution is to remove each parasite with tweezers, hence why it is so important to ensure that this is prevented from spreading straight away. In many cases, fish will need to be anaesthetised in order for this to be done successfully, as the entire anchor worm must be removed to prevent infection. This is not something to try and do if you are not experienced. The use of Permanganate to dip tweezers into in advance of pulling on the parasite will often encourage the parasite to release its hooks and enable you to successfully remove the entire thing in one go.

The Fish Louse, Argulus, is easily identifiable, and can be seen on the skin and fins where they suction on to the fish and cause serious irritation and inflammation. They are like a small flattened disc, and measure from anything up to 1cm, so are usually obvious. They feed on the blood of the fish, so cause major disruption and often allow infection to build up.

Treatment for Argulus is usually a salt dip, though a treatment of Waterlife Parazin P is also very effective, if you’re able to quarantine the fish in smaller volumes. This treatment can also be effective against Anchor Worm in the correct doses. Again, sensitive fish like Rudd and Orfe would be best treated with the salt water dip.

Trichodina is a microscopic parasite that lives across the fish, and over time and in large numbers these will seriously irritate your fish. As they are not visible unless under a microscope, the first visible sign of this is a milky secretion across the skin due to the irritation to the mucus. The common flashing and rubbing will occur, where the fish is trying to relieve their skin. As this is a common symptom with other diseases, the only way to verify this parasite is by a skin scrape under a microscope, so diagnose can be hard.

The best treatment tends to be a general Anti-Parasite treatment, such as the NT Labs Eradick Anti-Parasite, as most cases aren’t properly diagnosed. This general base treatment is suitable for the more sensitive species such as Sturgeon, though a more robust Malachite treatment would be suitable if there are not sensitive species in the pond. These will be damaging the soft tissue, often around the gills, so again Acriflavin can be helpful in the recuperation phase after treatment.

Another small microscopic parasite that is very difficult to diagnose unless there is a skin scrape checked under a microscope. This is often found to be in small numbers in healthy fish, and will only really affect the fish when in large volumes and they start to affect the immune system.

Unlike many other parasites, Costia thrives in cold water, so will do well in lower temperatures, but cannot survive over 30C (but then again, this is Britain..). Exactly as other microscopic parasites, this often manifest in unhappy clamped fish with milky skin, who itch themselves regularly. Similarly, an all-round treatment, such as the Blagdon Anti Parasite, would be best to treat this.

When using many treatments you will need to remove any carbon and zeolite from your filter canister too, as the treatments will be removed from the water by this, and so ineffective. Similarly, you must ensure that UV clarifiers are turned off during treatment, as they will kill the active ingredients in the treatment and make it useless.

The priority with fish diseases is to check fish regularly – ensure that you are looking at and watching your fish as often as possible, so if something isn’t right, you’ll notice it straight away. Unusual behaviour of sitting near the bottom, clamped fins or flashing across objects are all something that needs investigating straightaway. The more you know the behaviour of your fish, the quicker you’ll notice something isn’t right, and ensure they are treated straight away.