How to Heron proof a pond

Categories: PondsEquipment
Facebook groups are filled with pond owners either seeing Herons around their ponds or actually taking fish. So how do you Heron proof a garden pond? 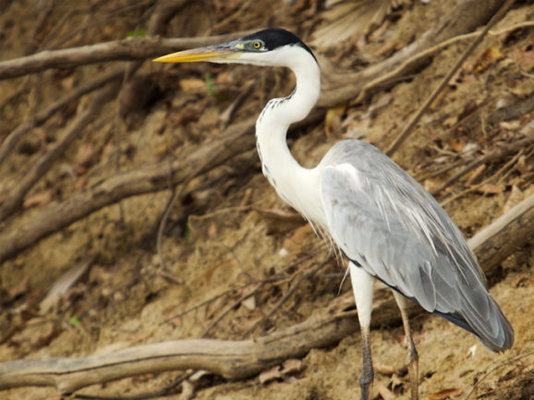 Facebook groups are filled with pond owners either seeing Herons around their ponds or actually taking fish. Increased time at home has meant that many of the grey marauders are being caught in the act when homeowners would usually be out at work, or they’re being caught by increased use of CCTV.

There are thought to be around 10,000 herons in the UK and they are the number one raider of pond fish, although cats, otters, mink, seagulls and even crows and magpies will steal fish too. Herons are a protected species so it’s against the law to shoot, trap or harm them in any way. But you can deter, scare and shock them using a variety of methods listed below, and if all else fails, a net is the only sure way to prevent them.

For years, decoy herons have been the go-to garden heron deterrent. Lifesize, these plastic herons are placed next to the pond in the hope that it will deter another, live heron from landing at the same pond and consuming fish.

The theory behind the decoy is that Herons are solitary hunters and territorial when it comes to fishing spots, so place a plastic heron at your pond and if another flies past, it will know not to fish there. But when it comes to nesting, Herons are communal birds, with heronries having upwards of ten nests in a single tree. When herons fledge there will be an increase of young, hungry birds around waterways, and CCTV footage confirms that a decoy is not always effective as live birds have been caught dining on goldfish next to artificial ones. But it’s worth a try…

Other artificial bird species like decoy owls can also be used to scare off would-be feathered predators and a well-placed owl can even make humans jump, first time around.

Like in a farmer’s field, anything out of the ordinary can cause birds to take flight, so reflectors, spinners and flags can be used to deter herons. As the light catches them, the wind moves them or some predatory looking eyes appear on a flag, it can be enough to spook these nervous birds and if used in combination they won’t make for a pleasant hunting spot.

A step up from that is a laser deterrent, which is triggered by movement around the pond and can shine a startling laser beam, release a series of bright flashes as well as startling sounds. Feedback on these has been good, and their use alone may be enough to prevent having to net the pond permanently.

Jet sprayers combine motion-detecting PIR with water from the hosepipe to spray jets of water up to 10 meters across the pond. Enough to send a Heron off, these are also effective on cats and while initially shocking to any animal, they are ultimately harmless and a humane way to deal with persistent pests.

Heron stops use fine line like fishing line, tied to stakes around the pond. Carefully placed, the invisible wire will block the flight path of incoming herons, prevent landing and hopefully prevent perching and subsequent stealing of fish. Typically placed around the perimeter of a pond, fishing line and Heron stops could also be used higher up to criss-cross the surface area of the pond, especially when used in conjunction with a pergola.

The next step up is an electric fence like the Velda Pond Protector. Supplying a small electric shock to whatever touches it, it will be effective on any animal which walks into it, ill-intentioned or otherwise.

Pond cover nets are the only way to really prevent a Heron from taking pond fish. The fine mesh will prevent the bird from sticking its head and neck through, while also preventing pond fish from being pulled back through it. This also means it will keep valuable pond fish, prone to jumping, the right side of the net.

The best way to fit a cover net is to keep it tight across the pond and hovering a few inches above the water. That way any leaves it catches will be held up, high and dry, instead of rotting in the water. Do ensure that every part of the pond is covered by the net as a gap of just six inches will be enough for a heron to predate fish as normal, especially if the fish associate that gap with the place that you feed them.

And CCTV has also picked up otters slinking under nets, decimating pond fish before slipping out again, so if you want a pond net to also keep Otters out, every bit of the pond edge should be secured with screws or battens to make sure nothing will be able to get under it at any point.

If you dread the thought of an unsightly cover net then again you could place one high up on top of a pergola (although this won’t stop otters,) or you could opt for floating pond protection guards. Modular, floating screens, these rigid plastic coverings sit on the water and can be linked and cut to fit the surface of your pond while also fitting around plants and filter inlets.

Effective against herons, they offer an alternative to those who still shun netting but have exhausted all other options.